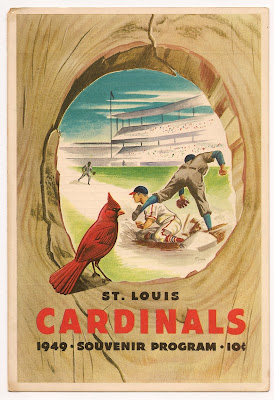 When the St. Louis Cardinals upgraded their scorecard to a “Souvenir Program” for the 1949 season, they created a contest to design the cover.

The prize for the winning idea was worth $100. If the winner could produce acceptable final artwork, another $400 was awarded.

commercial artist Frank W. Love was named the winner from among 390 sketches received. He took home all $500 with his knothole look at a play at third that many collectors recognize as a Charles Conlon photo of Ty Cobb sliding into third base, as seen on a 1929 T202 Hassan tobacco card.

Notice that on Love's creation, the "Cobb" figure is wearing a St. Louis Cardinals uniform.

Very reasonably priced today, a decent example of the 1949 Cardinals program can be had for less than $20.