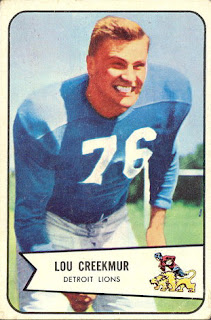 On Oct. 21, Dave Mazeroff was arrested in connection with a plot to extort $10,000 from Creekmur as hush money to cover up a non-existent assault on a young woman.

Police became involved when they were approached by 22-year-old Lucille Genoff, who told them Mazeroff had instructed her to accuse Creekmur of attacking her and to demand $10,000 not to go to the police.

According to the district attorney’s office, the woman refused to go through with the plan and Mazeroff threatened her. She said Mazeroff told her, “Don’t mess with me. You’ve heard about the Hooper killing. I’m fingerman in that one.” Police believed he was referring to the unsolved murder of State Senator Warren G. Hooper, who was killed while sitting in his car in 1945. Hooper was set to testify in a grand jury investigation into legislative graft in Michigan.

When he was told of the scheme, Creekmur denied knowing Genoff.

I couldn't find any record of the outcome of the Creekmur extortion case against Mazeroff. Nobody was ever convicted of pulling the trigger in Hooper's murder, though a number of people -- not including Mazeroff -- went to prison for conspiracy in the case.