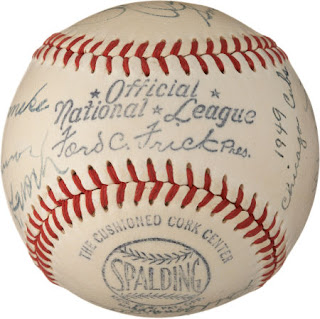 Because the Chicago Cubs didn’t “approve” of autographed baseballs in the late 1940s, several boys’ homes received windfalls of baseball equipment.
A short article in the Feb. 8, 1950, issue of The Sporting News was headlined, “Cubs’ Autographed Balls Supply Boys’ Equipment.”
The article read:

, —For the third straight year a school for homeless boys in has received a gift of playing equipment as a result of the Cubs’ policy of selling autographed balls for $5 each.
Every person asking the Cubs for an autographed ball receives a statement of policy which reads:
“We don’t approve of the fad for autographed baseballs. We think baseballs should be used in ball games, giving enjoyment to players and spectators, rather than reposing as relics on shelves or in drawers. But since some folks insist on autographed baseballs, we are trying an experiment. They are available at $5 apiece and the proceeds of the sale will be used to purchase baseball equipment for youngsters.

The article went on to specify that in 1947, the baseball equipment was given to Lawrence Hall, a home for Protestant orphans and “boys from broken homes.”
Subsequent beneficiaries were Angel Guardian Orphanage, a Catholic home, and, for the 1949 season, Nathan Marks Hall, operated by the Chicago Jewish Children’s Bureau.
For his $5, the ball collector received an Official National League ball supplied by the team, that was authentically autographed. In 1950, teams were paying $2.10 apiece for league balls. 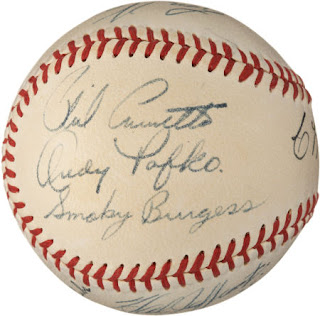 Speaking of autographed balls . . .
In the Feb. 15 issue of TSN, it was reported that Lefty Grove auctioned one of the balls used in winning his 300th game at an American Legion dance in Lancoming, Md., to benefit the March of Dimes. The ball sold for $20.


Speaking of autographed balls (2) . . .
A frequent advertiser in The Sporting News throughout 1949 was the company that sold facsimile-signed team balls, Autographed Ball Corp., of High Point, N.C.

The company was owned by former major leaguers Dick Culler and Billy Jurges.

In 1949, a souvenir ball from any team could be had for $2. Today such facsimile-autographed balls from that era can sell for $50-100 to collectors.

The company is still in business today.