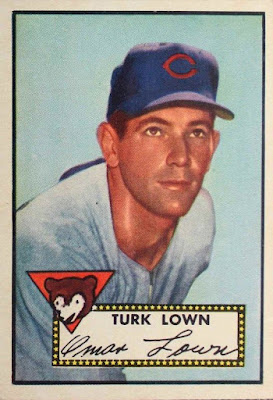 The SABR bioproject has a fine baseball biography of Lown, written by Adam Ulrey, at Turk Lown  bio.
Here's the current list of living players from '52 Topps. 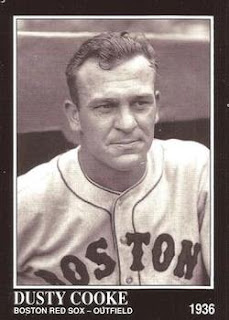 It's the 1930s and the batter at the plate at Sportsman's Park in St. Louis gets ahold of the pitch, sending it 400 feet to right-center field. The ball clangs off the edge of the roof covering the bleachers, bouncing back into the field of play.

If the St. Louis Browns are hosting another American League team, the umpire signals home run. If, however, the Cardinals are the home team in a National League game, the umpire makes no such call; the ball is in play and the runner advances as best he can.

If you look at Dusty Cooke's major league record (and why would you?) in the "official" encyclopedia Total Baseball, or on baseball-reference.com, you'll see him credited with two home runs for 1938.  If you delve deeper into Cooke's game logs, however, you'll find only one home run credited.

What's up with that?

Cooke was playing right field for the Cincinnati Reds at St. Louis on May 14, 1938.

In the top of the 6th inning, the Reds were ahead 3-1 with two out and two on, Cooke hit a blast into right-center field. Lonny Frey and Billy Myers scored as Cooke slid into third.

Cincinnati manager Bill McKechnie came out to argue that Cooke should be given a home run, as the ball he hit struck the edge of the pavilion over the bleachers, or one of the steel beams supporting the roof. That meant the ball had cleared the concrete wall as it left the field of play.

McKechnie argued that Cooke's run should count and the score should be 6-1 in favor of Cincinnati. The Cardinals scored four runs in the bottom of the 9th which should have given the Reds a 6-5 victory.  Rookie Enos Slaughter banged a two-run homer in the bottom of the 10th to win the game 7-6. McKechnie phoned league president Ford Frick to protest the game.


In typical Ford Frick style, the prexy dithered while players and management of both the Reds and Cardinals argued their case in the media. Frick said he would visit the St. Louis ballyard on June 1 to study the matter and issue his decision thereafter. On June 3, Frick ruled.

It was his decree that the game would be replayed in its entirely as the second game of a Aug. 20 doubleheader when the Reds visited St. Louis.

That decision pleased nobody. The Reds felt the proper disposition would be to resume at game in the bottom of the 6th with the Reds ahead by 6-1. The Cardinals were unhappy with the date of the make-up game. They already had a doubleheader scheduled against Cincinnati on Aug. 21. It made more sense, they argued, to schedule the replay for July 11 or 12 when the Reds would be visiting for single games.

The game of Aug. 14 went into the books as a 7-7 tie, with Cooke being credited with a home run.

Reds manager McKechnie was quoted saying, "We won that game fairly and squarely and it really should be awarded to us without any replay of any sort, but making us play an entirely new game is decidedly unjust. However, we'll play it as ordered and make no further protest."

The Reds won the first game of the Aug. 20 doubleheader 4-2; Cooke did not play. He also sat out most of the make-up game, getting a pinch-hit single to start a three-run rally in the top of the 8th. It wasn't enough for the Reds to prevail, however, as the Cardinals won 5-4. St. Louis won both games of the next day's doubleheader. Cooke was an unsuccessful pinch-hitter in both Aug. 21 games.

When the 1938 season ended, it also marked the end of Dusty Cooke's major league career.

After three minor league seasons, he come up with the Yankees in 1930. Injuries limited his play in 1931 and, especially, 1932, when he had only one plate appearance. He'd been traded to the Red Sox for 1933 and played four years with Boston.

He spent the 1937 season with Boston's farm team at Minneapolis. He was having a great year when he was sold to the Cincinnati Reds for delivery in 1938. With the Millers in 1937 he hit .345 with 18 home runs.

In retirement he joined teammate Ben Chapman as trainer and coach with the Philadelphia Phillies. He also reportedly joined Chapman in virulently race-baiting Jackie Robinson when he came up with the Dodgers in 1947. 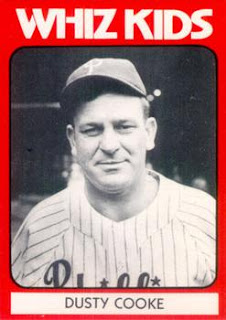 An excellent account of Cooke's baseball life can be found written by Bill Nowlin on the SABR biography project. Dusty Cooke baseball bio

Though his big league days coincided with the Goudey bubblegum baseball card heyday of 1933-38, Dusty Cooke never appeared on a major card issue during his playing days.

In 1949, while coaching with the Phils, he was included in the set of Phillies and A's newspaper "cards" issued by the Bulletin in its Sunday roto section.

Until now, there has been no place where all of my custom cards could be found in checklist form.  It is my intention to update this posting as new cards are created. Similar checklists for my baseball and football custom cards will also be posted.

Custom card availability. Unless noted, all of my custom cards are available to collectors for $12.50 each, postpaid for one or two cards; $9.95 each for three or more (mix/match). To order, email me at scbcguy@yahoo.com for directions on paying via check/money order, or to my PayPal account. 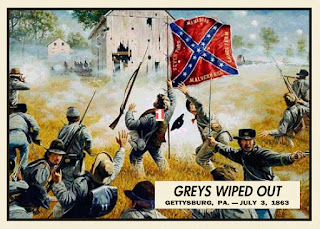 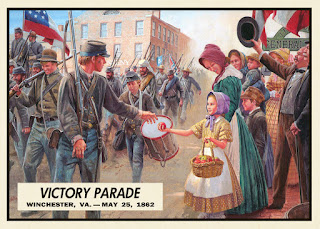 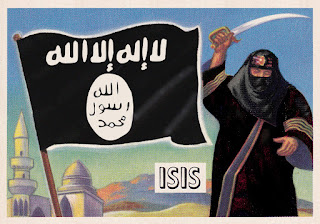 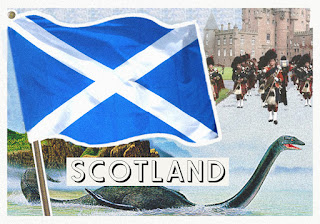 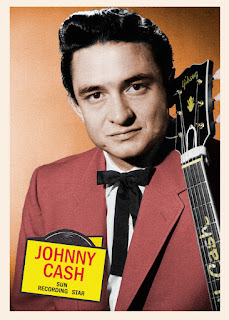 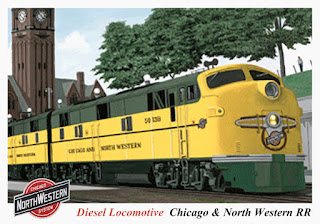 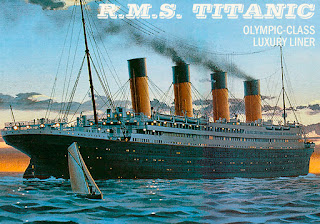 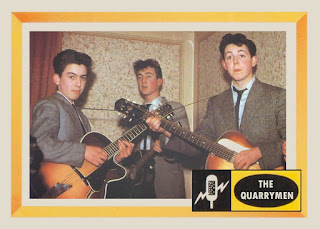 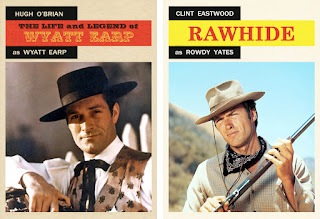 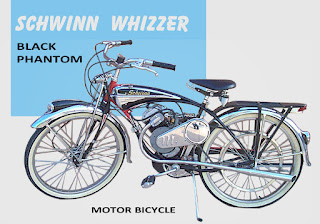 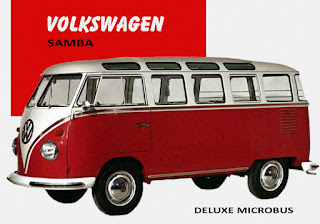 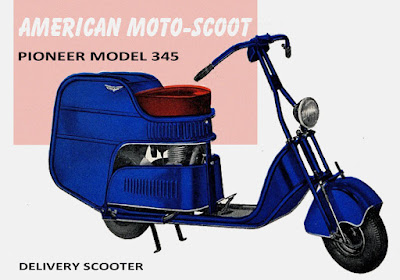 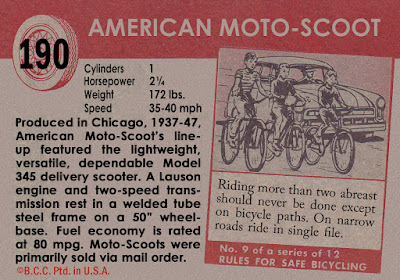 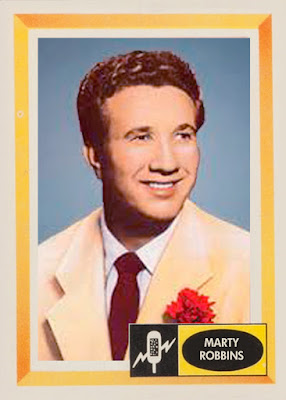 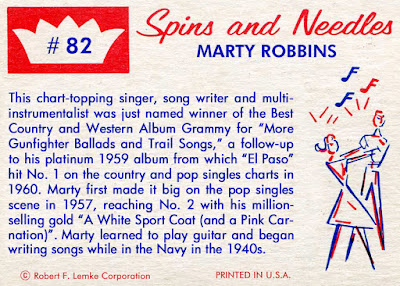 Most of the 80 subjects in Fleer's original 1960 "Spins and Needles" bubblegum card set were drawn from the world of what was then collectively known as pop music.

Today many of the artists on those cards are better known as belonging to the genres of Rhythm & Blues, Folk, Rockabilly, Doo-Wop and even Rock and Roll.

There weren't many Country and Western singers in the Spins set, so I've added a custom card for a long-time favorite of mine, Marty Robbins.

Roy Orbison was more closely related to the original Spins subjects but his career had not really taken off by the time Fleer released the set.

Purists may note that the backs of my new custom Spins cards reflect 1961 dating, rather than 1960. Consider it a Second Series, if you will. If I had adhered to the strict 1960 timeline, there would have been precious little to say about Robbins and Orbison.

You can find all you need to know about Marty Robbins and Roy Orbison, and even hear much of their music, on various internet sites, so I'll just share the images of my cards. 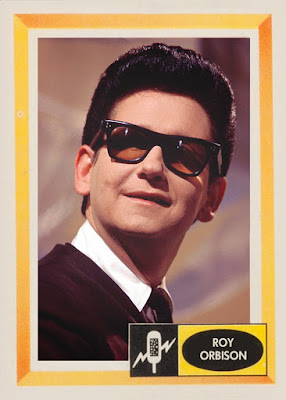 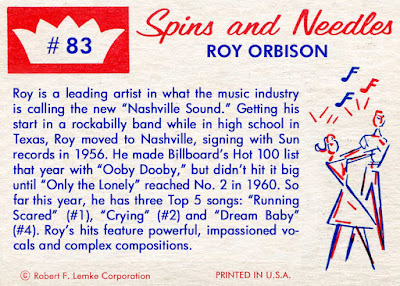 You can order these card. Unless noted, all of my custom cards are available to collectors for $12.50 each, postpaid, for one or two cards; $9.95 each for three or more (mix/match). Complete checklists of all my custom baseball, football and non-sports custom cards were published on this blog in late May. To order, email me at scbcguy@yahoo.com for directions on paying via check/money order, or to my PayPal account.
Posted by Bob Lemke at 1:17 PM No comments: