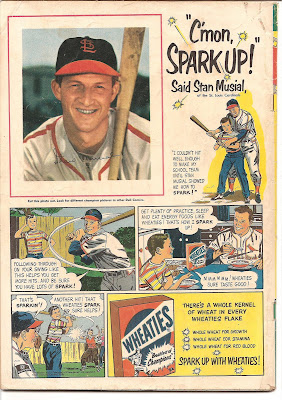 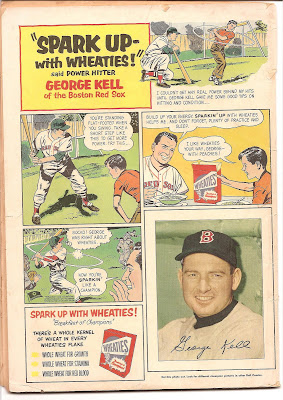 After my initial response to Steve, admitting that I didn't have much data about the Wheaties ad comics covers, but that I definitely remembered seeing a Yogi Berra ad and possibly a few others, he did some digging around the internet and came up with these baseball players: Yogi Berra, Roy Campanella, George Kell, Stan Musial, Phil Rizzuto and Al Rosen, along with hockey Hall of Famer Sid Abel.
I wouldn't be surprised if there are few other baseball players in the series, and perhaps even a few more non-baseball athletes. Some of Wheaties' line-up of endorsers in that era included Ralph Kiner, Bob Lemon and Preacher Roe. I suppose it's not out of the realm of possibility that there might be Jackie Robinson ad in this series, as well.
If you have scans of other ads from this series that you'd like to share, e-mail them to me at scbcguy@yahoo.com.
Posted by Bob Lemke at 11:04 AM No comments: 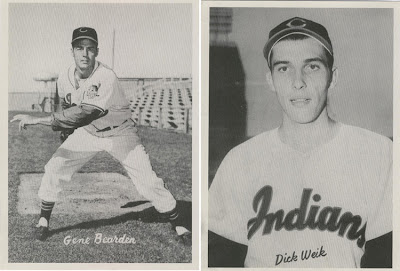 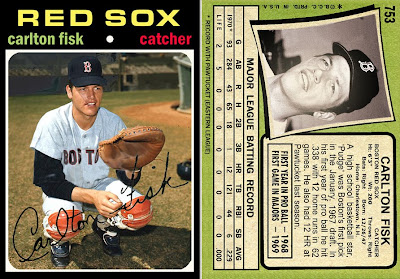 Well, it HAS been a while. I was away from my home base for nearly two weeks, and then busy playing catch-up at work and with my hobby projects.


I'm finally getting time to post my newest custom card creation, a 1971 Topps-style Carlton Fisk to go along with the 1970-style card I posted nearly a month ago (April 28).


The '71 Fisk was the first for me in that format, but now I have a template created in case I want to delve any deeper into that genre. Truthfully, though, I don't really have any other 1971-style cards in my sights right now.


In 1971 I was no longer buying cards. At age 20 I was more interested in growing my hair, overthrowing the government, pursuing hippie chicks and my part-time job in pharmacological distribution. By '71 even my youngest brother had stopped buying cards, so I was never really exposed to what Topps was doing until I got back active in cards around 1979.


Card-wise, my heart will always be in the Fifties.
Posted by Bob Lemke at 9:39 AM No comments:

This was an exciting NFL draft for me. Besides waiting anxiously to see with which team home-town boy Austen Lane would land, and which team would take Tim Tebow and when, I was watching the selections to see where Dexter McCluster was going in the NFL.

I had the pleasure of watching McCluster in person at Ole Miss against Nat'l Champ Florida in 2007. He is a playmaker, though he is decidedly undersize for the NFL. I was hoping that the Green Bay Packers would realize that McCluster could fill a number of their needs, principally as a "change-up" running back and as a punt returner. I don't really follow any other NFL teams, although I have some leftover affection for the N.Y. Jets from my days as a Namath fan, and I'll always watch the Giants with their Ole Miss alumn quarterback. Now I have a reason to tune in the Chiefs when they're on TV.

I decided to go with a 1952 Bowman style card, instead of my usual 1955-Topps All-American, because I found such a great artwork picture of McCluster on the cover of a video game.

Unfortunately, the huge EA Sports logo on the game box covered too much of the player's right side just below the football, so I wasn't able to opt for a vertical format, or plkace the name banner/logo desigjn elements below the picture, as is more commonly seen on '52 Bowmans. Still, I like the final result.
Posted by Bob Lemke at 11:26 AM No comments: 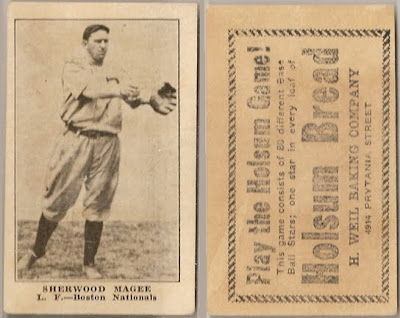 An inquiry from a reader about what appeared at first glance to be an unchecklisted card from the 1921 Holsum Bread set prompts a warning about some "old" (20th Century) counterfeits.

The appearance of a Boston Braves card of Sherry Magee in a circa 1921 set was the first red flag. Magee last played for Boston in 1917, and was out of the major by 1919. I posted these scans and an inquiry about the card on the Net54baseball.com forum and quickly received verification that this is a fake.

Since the early 1990s, this type of counterfeit has been plaguing the hobby. Regardless of the advertising on the backs (more on that later), the cards share a few physical characteristics.

The card stock is somewhat rough and often shows a yellowish or ochre tint. Vintage card experts Frank Ward and Leon Luckey describe the counterfeits as having a slight gloss on the front.

The front photos are kind of fuzzy, probably because they have been copied either from genuine 1917 Collins-McCarthy cards or possibly even reprints of that set. The principal at-a-glance difference between this family of fakes and genuine C-M cards is that the real cards have a card number centered in the bottom border.

The typography on this Magee card is all wrong for a 1921 Holsum. The bread company's set was derived from the 1921 American Caramel (E121) / W575-1 strip card sets. As such, it should feature sans-serif type on the front.

Fortunately, for all but the most novice of collectors, the backs of these fakes are readily discerned as poor reproductions of the real thing. On these counterfeits, the back printing seems to have been rubber-stamped, rather than printed by the correct lithograph or offset technology of the early decades of the 1900s.

While this appears to be the first of these counterfeits to surface with a Holsum Bread back, they have been seen with backs advertising Oodles Chocolates and Kendig Chocolates, neither of which ever produced baseball cards, as well as Henry A. Johnson Confectioners -- which issued genuine overprinted backs on similar series in the 1920s.

Given the permanence of information posted in cyberspace, it seemed like a good idea to put this information out there.
Posted by Bob Lemke at 3:24 PM No comments: