Ballplayers get the best-looking babes, Part 2

Continuing with my periodical presentation of vintage photos amassed over 30+ years in the sportscard publishing world is this selection of photos of baseball players with their wives, fiancees or girlfriends.

I presented a trio of similar photos almost exactly a year ago, in my blog of 9/9/11. 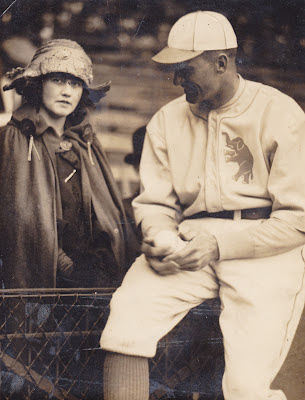 First is Philadelphia A's pitcher Bob Hasty, with his wife, in an undated photo.

The rampant elephant patch on the uniform was worn by the Athletics 1921-23.

You'll recognize the guy in the next photo, of course. But the future Mrs. Joe DiMaggio in the picture is actress-wife #1, not Marilyn Monroe.

She's Dorothy Arnold, a stock actress with Universal Studio. The two met in 1937 on the set of Manhattan Merry-Go-Round, a movie in which Joe Di had a small speaking role, but in which Dorothy had no lines.

The couple was married on Nov. 18, 1939, about a month after this wirephoto was run in the Ft. Worth Star-Telegram.

A clipping from what appears to have been some sort of sports' personality column read, "Joe DiMaggio has been seen doing a lot of Fifth Avenue shopping during the last 10 days. He has been buying wedding presents for Mrs. Joe-to-be, who is a young and pretty movie actress named Dorothy Arnold. Already he has collected a mink coat as one of her gifts."

Arnold bore DiMaggio his only child, Joe, Jr. The couple divorced in 1944, while DiMaggio was in the Army in Hawaii. 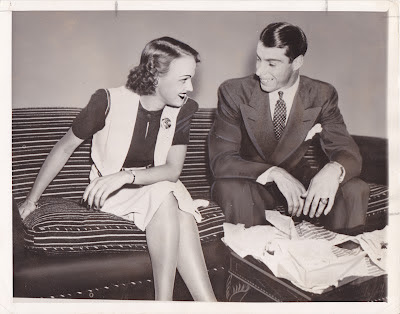 Evidently fur coats were favored by ballplayers' wives, if the photo here is any indication. 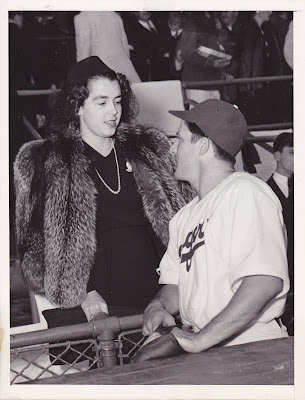 Perennial All-Star left fielder Joe Medwick is pictured in this Acme news service photo at Ebbet's Field on Oct. 4, 1941, before Game 3 of the World Series with the Yankees.
He had wed the former Isabelle Heutel in 1937.

Ducky went 1-for-4 in the game, with a strikeout. The Dodgers lost the Series to New York 4-1.