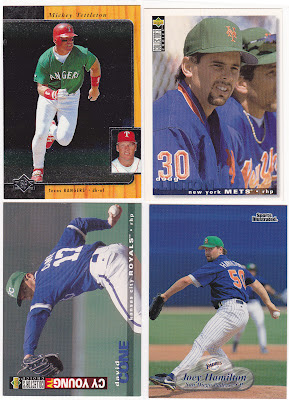 When I left the employ of Krause/F+W publications in May, 2006, I arranged to buy about a million sportscards that had accumulated in the company's warehouse.
﻿﻿
These were mostly cards that had been sent to our sports collectors' periodicals (SCD, Tuff Stuff, Baseball Cards/Sports Cards, et al.) by the card companies for product reviews, cataloging, etc.

﻿﻿﻿﻿﻿﻿﻿﻿﻿﻿﻿﻿﻿﻿﻿﻿The vast majority of the cards were from the 1990s.
﻿
I spent the next five years sorting more than 180 monster boxes down, separating the wheat from the chaff (OK, these were 1990s cards, so it was mostly separating the chaff-ish from the chaff). Mainly I was setting aside cards and sets that I felt had a value of $1 per card or more, or might in the future.

As I shuffled through these cards, a couple of themes caught my attention, and I thought it might be fun to see how many cards I could find that fit that theme. I limited my searching to baseball cards, though I imagine the same, or similar, themes could have been found among the football, basketball and hockey cards.

One theme that I noticed was cards of players wearing special St. Patrick's Day cap and/or uniforms. St. Paddy's falls in the middle of spring training and for more than 25 years some teams have honored the occasion by sporting green jerseys and/or caps for that one day. I suppose most of these specialty uniforms are then sold for team charities, etc.

Most of these cards used at least two, and sometimes three, photos on each player's card. This created unprecedented demand for player photos . . . portraits, candids and game-action. So it's no wonder that in the rush to get enough unique player photos for each new set, it's not surprising that some of the photos featured the spring training St. Patrick's Day outfits.

I came up with eight cards that fit that theme; there are probably more. Putting together a collection like this proves that the card hobby can still be fun, and isn't exclusively the province of superstars, autographs, game-used inserts and 1/1s. 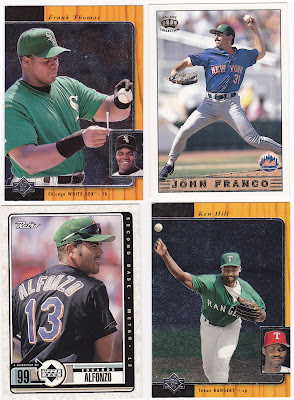 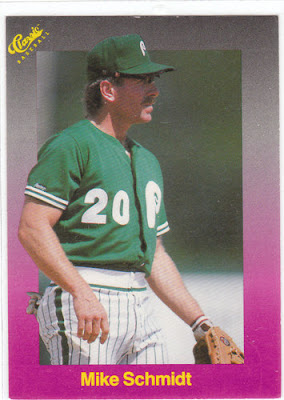