Pretty Pictures: The unserious side of baseball

Continuing with my periodical presentation of vintage photos amassed over 30+ years in the sportscard publishing world is this pair of photos of baseball players cutting up for the camera.

In today's world of professional baseball, the players are evidently too cool for such antics.

The first photo is undated, but based on the caption most likely dated to 1949.

Joe Migon shot the photo for International News Soundphoto. The caption on the back pretty much says it all . . . 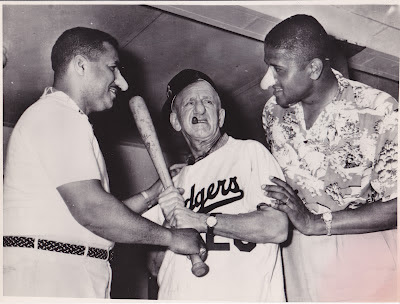 You just can't hardly get rookies like this no more
Miami, Fla . . . The prize rookie of the season showed up today when Jimmy Durante reported to the Dodger training camp. Here the 'Snozz' looks as if he's trying to convince catcher Roy Campanella, left, and pitcher Don Newcombe that 'Dis baseball playin' is a serious business.' Their acquisition of Durante-type noses doesn't help matters, however.

Back then, it seems making fun of the proboscisally-enhanced wasn't a matter for the political correctness police. 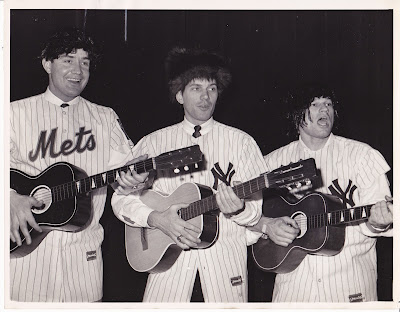 The second photo is also undated, but appears to be a 1964 shot.

A newspaper clipping that accompanies it reads . . .

BASEBALL'S BEATLES--There may be only three, but Tracy Stallard, right, now with the St. Louis Cardinals; Phil Linz, center, of the New York Yankees, and Jim Bouton of the Yankees manage to make as much noise as the four Beatles. And they sound almost as good, too.
Posted by Bob Lemke at 2:20 PM