In the past year I've been presenting blog entries using the umbrella title of "Pretty Pictures." That was the title of a 1930s book of cartoons by Otto Soglow that I read and reread as a child.

These photos represent the gleanings of 30+ years of throwing pictures into files during my days as a sports collector, writer, editor and publisher. I've moved these folders full of photos at least six times. What makes me think that if I haven’t found time in the last couple of decades to convert these bits and pieces into features for the entertainment of collectors, that I will do so in the next couple of years?

Fortunately, rather new to the equation is this blog. It’s a lot easier to convert photos to images and “publish” articles on the internet than it was in the ink-on-paper days.

With that in mind, I’ve determined to try to wade through the files and present, as space and time allows, some of the highlights. 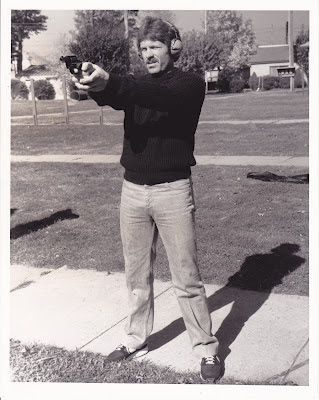 Here is an unusual photo of Mike Schmidt. There is no caption and it is undated. But as I said in my blog entry of Sept. 18, it is probably not a picture that most ballplayers would allow to be taken today.

The photo appears to have been taken at a shooting range. Schmidt was shown taking aim with a revolver of very large caliber; probably a .44 or .44 magnum.

While Schmidt has taken the precaution of wearing ear protection, he's not wearing shooting glasses, which would probably get him thrown off most firing ranges today.

I offered this photo on eBay for two weeks at $4.99 delivered, with no bidders. I guess I'm the only one who found it interesting.
Posted by Bob Lemke at 2:37 PM