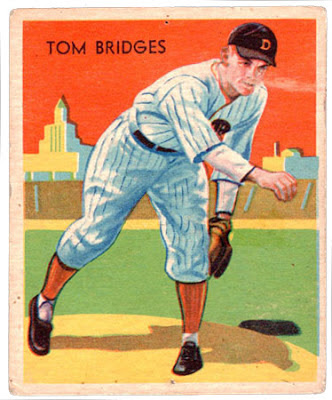 BRIDGES VICTIM OF ATTACK
Verle Penney, a 41-year-old Portland (Ore.) trucking contractor, was booked in Hollywood, Calif., January 14 [1950], on suspicion of assault with intent to murder Tommy Bridges, former Detroit pitcher, now the property of the San Francisco (Pacific Coast) Seals. The contractor, who last year filed a $20,000 alienation of affections suit against the pitcher, was arrested after an affray which involved the two and Penney’s former wife. The Penneys were married in 1929 and were divorced last August. Bridges told police he and the divorced wife had been going together since last September and that when they came out of a drug store where Mrs. Penney was employed, Penney shoved a pistol in his ribs, saying: “This is it,” then hit him three times on the head with the gun. Passersby seized Penney and held him for the police.

Charges were dropped against Penney less than two weeks later by Municipal Court Judge Joseph F. Chambers, who ruled there was insufficient evidence to warrant prosecution for assault with a deadly weapon with intent to commit murder.

Penney had testified that after he "persuaded" Bridges and his ex-wife, Ione, into the alley behind the drugstore, Bridges attacked him with his fists.

Penney's suit against Bridges charged that Bridges had alienated his wife's affections "by flattery, gifts, exchange of love letters and secret and open meetings at dances, taverns or clubs."

Ione left Verle on May 21, 1949, and sued for divorce three days later, charging that he "treated her cruelly and inhumanly by assaulting and threatening her.