Or was it Rae/Ray Scarborough? 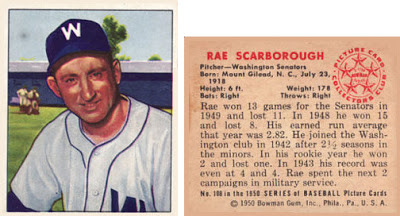 In my December 15 posting I stated that Herb Score may have been the first “Million Dollar” ballplayer.

I guess I was off by a few years.

In 1950, when the perennially last-place Senators were being besieged with offers for pitcher Ray Scarborough, Washington owner Clark Griffith said he’d let the pitcher go . . . for $1,000,000.
had won 15 games in 1948 while losing eight. It was his first winning season since his rookie year in 1942. 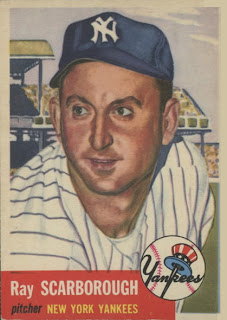 According to a sidebar in a May 10, 1950, Sporting News feature speculating on ’s future, it happened like this:

Scraps Rae;
Record Proves It's Ray
For years Ray Scarborough of the Senators signed his first name as Rae, and it so appeared in the Baseball Register until the pitcher changed the spelling to Ray for the 1949 edition.
Deciding that Rae sounded feminine, Scarborough had sent an inquiry to , N. C., where the vital statistics revealed he had been christened Ray Wilson Scarborough.

That account is at odds with what I generally consider to be my final authority: baseball-reference.com, which says ’s birth name was spelled Rae. However, I’m a firm believer that a person can choose what name he wishes to be known by, so for me, it’s Ray.