First card for most feared tackler of 1950s 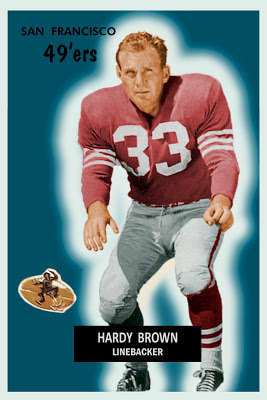 I guess the reason I never heard of Hardy Brown until a couple of years ago is that he never appeared on a football card--until now.

My latest custom card honors Brown, one of the most haters players of the 1950s.

I first heard of Brown while having lunch at a local bar where the NFL Network was on TV, airing a show about Top 10 Most Feared Tacklers of the NFL. There at #5 was Hardy Brown. I was familiar with the other guys on the list--Butkus, Lawrence Taylor, Jack Tatum, etc.--but Brown was new to me.

The piece on Brown only consumed about four minutes of the show, and is widely available on the internet.

You'll also find many other internet offerings on Brown, so I won't go too in-depth here about his life and career.

The digest version is that when he was four year old he was in the room when two men gunned down his fathers. Six months later he was also present when family members killed one of his father's murderers. Shortly thereafter he was sent to an orphanage in Ft. Worth with his brother and sister.

He joined the Marines as a paratrooper in World War II. After the war he played football at Tulsa.

In 1948 he started his pro football career with the Brooklyn Dodgers of the All-America Football Conference. He spent the next season with the Chicago Hornets of the AAFC, then in 1950 played for the "old" Baltimore Colts and the Washington Redskins in the NFL.

From 1951-55 he was with the San Francisco 49ers. He opened the 1956 season with the Hamilton Tiger-Cats of the Canadian Football League, then was traded back to the NFL, to the Chicago Cardinals.

Brown was out of pro football from 1957-59, working construction in Texas and tending bar in Las Vegas.

At the age of 36 he signed with the Denver Broncos of the new American Football League, playing in 13 games before ending his football career.

Brown was one of only two men to play in the AAFC, the NFL and the AFL (the other was Ben Agajanian). I suspect he was the only man to play in those three leagues plus the CFL.

Brown is credited with popularizing the use of face masks because of the damage he did with a signature shoulder smash into the chest or chin of opposing players. He once said he knocked out some 75-80 players during his career; teammate Y.A. Tittle credits him with at least 20 KO's during the 1951 season.

Brown was so hard on opposing runners that the 49ers eventually banned him from intersquad contact drills and scrimmages.

Long before the New Orleans Saints' bounty scandal, Brown was the target of a bounty scheme by the L.A. Rams--nobody ever collected.

His later years were not good. Heavy boozing, the damage done playing football and his early childhood trauma combined to produce dementia that forced him to be institutionalized prior to his death in 1991 at the age of 67.

As I said, you can read all about Hardy Brown--which I strongly recommend--on the internet by doing a google-search, but I want to specially note a piece written in 1993 by former SCD writer Dwight Chapin of the San Francisco Examiner, for The Coffin Corner, the publication of the Pro Football Researchers' Association.

It's a pdf, so I can't link it here, but you can find it at:
www.profootballresearchers.org/coffin_corner/15-06-546.pdf


A piece you can't find on the internet is a feature in the Nov. 4, 1953, issue of The Sporting News, headlined, “Hardy Brown ‘Hatchet Man’ of the 49ers.”
sports writer Walt Gamage led with, “’The most feared man in football!’ That’s the awesome title tagged on Hardy (Hatchet Man), 49er linebacker, by rival National Football League players.”
Gamage’s feature carried the subtitle, “Demon blocker Tips Scale at Only 185 Pounds, But Every Ounce in Dynamite”.

“Brown has struck terror in the hearts of opposing ball carriers,” Gamage explained, “by means of his unique shoulder tackle or block. He accomplishes his deadly wallop by uncoiling his shoulder with a quick trip-hammer blow as he makes contact with an enemy player.

“Those on the receiving end of one of Brown’s sleep-producing socks declare it produces the same sensation as being hit over the head with a baseball bat,” the writer continued.

“Brown, who is small by pro league standards, weighing only 185 pounds, is becoming something of a legend around the pro circuit.

“Before a game last season, the Detroit Lions requested the referee to examine Brown’s shoulder pads to see if he was carrying hunks of metal in the padding,” Gamage related.

“Y.A. Tittle, 49er quarterback, in recalling the incident said he ‘almost died laughing at the sight of the ref shaking down my roommate as if he were some gangster.’”

Gamage then relayed the tale that after Brown had sidelined Rams halfback Glenn Davis and fullback Dick Hoerner “with his lethal shoulder block,” that at the start of the 1952 season each Rams player put $5 into a pool to be awarded to the Los Angeles player who “got” Brown.

“After three games between the two teams,” Gamage reported, “all the Rams players got was their money back. Hardy took the best shots of the gang and in return got in a couple of cracks with his much feared shoulder.”

In the TSN article, former 49er quarterback Frank Albert was quoted, “If you had a team of 11 Hardy Browns the league would never complete its schedule. There wouldn’t be any backs around the carry the ball by the end of the season.”

Gamage continued, “Teammate Gordy Soltau, high-scoring end, explained why Brown is never elected to the league all-star teams. He says all the opposing coaches hate Brown so much they wouldn’t think of voting for him.
“’I’m glad I’m not a halfback who has to play against the 49ers,’ Soltau added. ‘When the quarterback called upon me to hit the line, it would be on my mind that Brown would be out there some place ready to strike like a cobra.’

“The strange part about Brown’s devastating should block is that it is perfectly legal” Gamage said, “he has yet to draw a penalty for unnecessary roughness.”

Gamage recapped Brown’s background to that point. “Brown, who played out his collegiate career at , is in his seventh season of pro ball. Before coming to the 49ers he played with the Brooklyn Dodgers, Chicago Rockets and Baltimore Colts of the (All-American Football Conference) and later with the Washington Redskins.

“The tough 49er linebacker is a man of few words,” Gamage reported. “When asked to comment about his reputation as the ‘most feared man in football,’ he replied: ‘shucks, that’s a lot of talk. I never hurt anyone. I just give him a little nudge with my shoulder.’

“According to the backs around the league, Gamage concluded, “they fear the ‘nudge’ of Brown more than one of Rocky Marciano’s roundhouse rights.”

Accompanying the TSN feature was a photo of Brown labeled “Butcher Boy”.

Making a custom card of Hardy Brown wasn't an easy task . . . there are just not a lot of suitable pictures available. The picture I used is from a 1955 team-issued 49ers photo.

I initially envisioned doing a 1956 Topps-style 49ers card, but that was before I knew Brown's last season with S.F. was 1955.

My plan defaulted to a 1955 Bowman-style card, and I really like the way it turned out.

I would greatly enjoy making a 1960 Fleer AFL Broncos card of Hardy Brown, but I haven't yet found any pictures of him with Denver. 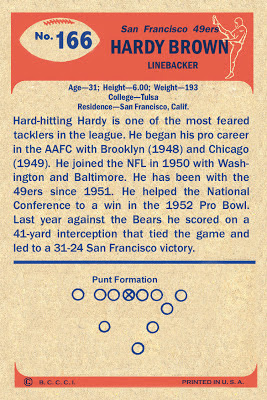