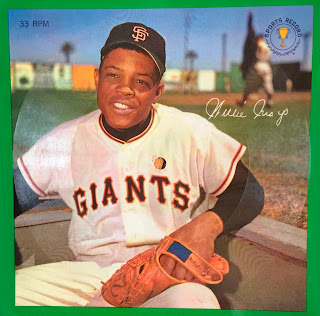 When the unsold hoard of 1964 Auravision records was dispersed into the hobby in the early 1970s, it was believed that the Willie Mays record was scarcer than the other 15 players in the issue.

With the advent of eBay, we now know that the scarcity is more perception than reality, but it is a bit of hobby lore that persists to some degree.

An article in the March 2, 1965, issue of The Sporting News offered a glimpse into what may or may not be a disparity in surviving numbers of the Auravision discs.

Headlined “Small Fry Load Up on Cake, Ice Cream at Willie’s Party,” the boxed feature was written by Art Rosenbaum of the San Francisco Chronicle.

Willie Mays gave a block party for the neighborhood kids on February 16. The invitation list was provided by the Forest Hills Improvement Association and some of the parents came to pay their respects to the Giants’ star.
“We took the group from the three blocks around my new house,” said Willie. Then he looked at the growing crowd. “I guess the others just came.”
Each guest received a Willie Mays color-picture recording, an autograph and all the punch, potato chips, cake and ice cream it was possible to eat. The cake was decorated on top like a baseball diamond with toy baseball players. 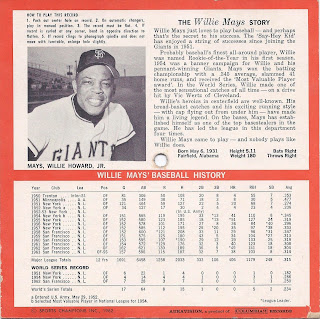 One family, the Labaughs, contributed nine children of all sizes.
“These kids,” Mays added, pointing around the room, “didn’t come to see me. They came to eat.”
He wasn’t too far off base. His friend, Robbie, in charge of refreshments, reported six jumbo-sized bags of potato chips had suddenly disappeared. Another emergency developed; a full punch bowl of ice cream had quickly become an empty bowl.
Willie’s decorator-plus home was not harmed, though the gold carpet may need extra cleaning from spilled cake and bubble gum. The children were well-dressed and well-behaved. They seemed impressed, but not very awed, by the Great Mays.
One brash youngster, a boy named Jimmy, didn’t seem awed at the carpet. “Not a bad pad you got here, Willie,” he said. 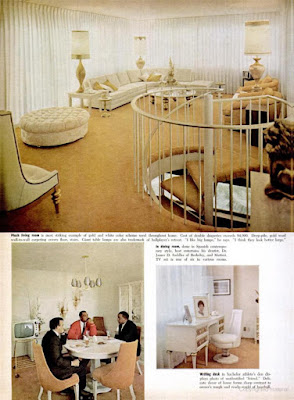 An article in the August, 1963, issue of Ebony magazine said that about 75 children attended the TSN-referenced party. The article offered a color pictorial tour of the home.

That gold carpet that Rosenbaum detailed had been mentioned in an earlier TSN article about Mays’ new home on Mendosa Avenue in what writer Jack McDonald called “the fashionable Forest Hill district.”

According to McDonald, the nine-room home into which Mays moved had cost the Giants’ star $90,000. Mays could afford it; he was about to sign his 1963 contact that would make him the fourth $100,000 player in baseball history, joining Ted Williams, Joe DiMaggio and Stan Musial at that exalted salary level. Mickey Mantle joined the $100,000 club a few weeks later.

McDonald added, “Willie did all the furnishing himself. He picked out every piece of furniture and every picture on the walls.  Everything is in excellent taste.” Mays told the writer, “I felt everything should be something I really wanted to live with. So when I went shopping and saw something I liked, I bought it.”

All the pieces blend beautifully. The living room drapes alone cost $3,000. His white-walled living room with $25 per square foot gold carpeting looks out on a breathless panorama that takes in the Golden Gate Bridge, Sutro Forest, Twin Peaks, St. Francis Wood and Angel Island.
A circular marble living room coffee table with gold legs is set off with an attention-commanding burnished gold lion’s head. There’s a pleasant gas-log fireplace and plenty of conveniently placed ash trays.
A circular staircase, leading off the living room to the garage below, allows him to get to his lime-green 1962 Eldorado convertible almost as quickly as if he slid down a fireman’s pole.
This dining room, done in French Provincial, has a circular table and his white Ransfil china plates have gold rims and are monogrammed ‘WM’ in engraved Old English. The insignia also decorates his wine goblets and the glass doors of the showers in his three bathrooms, taps of which are gold plated.
Willie has five phones in the house, and four TVs, one a $900 color set. The three others are portables. His bedroom has a king-sized bed. ‘I like plenty of room to thrash around,’ he said. A closet, running over 20 feet, the length of the bedroom, holds his many sports jackets and other wearing apparel.
There is a glass-walled billiard room and an alcove he uses to house his many trophies. The den has a small library. ‘I’m a newspaper and magazine reader, not a book lover,’ Willie explained. The books are confined to an Encyclopedia set, a Bible and a new-style abridged Webster dictionary.
Though Willie lives alone, except for a maid who comes in days to tidy up and make the beds, his place doesn’t have a ‘bachelor’ look’.
Why does he need nine rooms? He’s not a party-thrower. His idea of a good time is to have a few friends drop in for a game of cards, four-handed whist, bridge or gin rummy. Does he play poker? ‘Once in a great while,’ he said. ‘But Alvin Dark doesn’t like it.’ Willie has a well-stocked locker, with Scotch, bourbon, vodka and gin. He never drinks himself but likes to pour for guests. 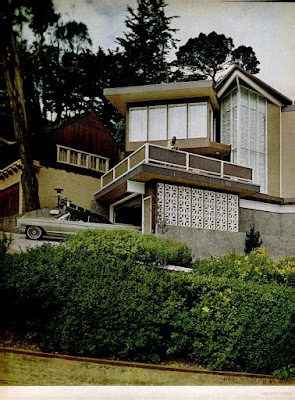