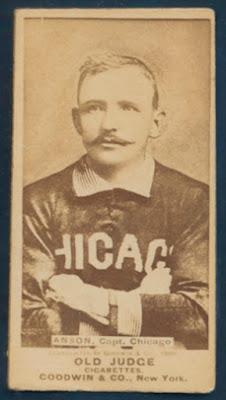 Something I learned while reading back issues of The Sporting News for 1964 is that for a time at the end of the season, the Cleveland Indians were making noises about leaving Cleveland and their cavernous home at Municipal Field where they had played most of their home games that season to crowds averaging 8,065, about 10.5% of capacity.

The most serious suitor was Seattle, but the team was also being wooed by Oakland and Dallas.

Predictably the fan base, and everybody else in town who benefited from big league baseball there, rallied to convince ownership that the city could still support the team.

One facet of the effort was a drive to sell season tickets.

In the Nov. 4, 1964, issue, TSN reported on one fan who was offering to sell what today would be a five-figure bit of baseball history in support of the ticket drive.

CLEVELAND, O.—During the “Save the Indians” campaign, a Tribe fan offered for sale the original 1884 Chicago Cub contract signed by Cap Anson, with the money to be used to buy 1965 season tickets for patients of the Veterans Hospital here.
The valuable document belongs to Raymond J. Carson, who operates his own insurance agency in Cleveland. Carson’s brother, Thomas, was married to the widow of Bert Briggs, a teammate of Anson.
Briggs died in 1910 and his wife Bridgett, kept the contract until her death in 1953. It was then passed along to Carson, who is still willing to sell it—and still anxious to use the money for tickets for Indians’ games next year.
Anyone interested in buying the collector’s item should contact Carson at [street address redacted], Cleveland, O.

The article did not speculate on the value of the Anson contract.

As usual in such cases, the team wasn’t really looking to accept the blandishments of major league wanna-be municipalities, but rather to squeeze the current home town – and its taxpayers – for a better deal.

In exchange for staying on the Cleveland reservation, the Indians got a new 10-year lease that called for a reduction in Stadium rent from seven percent of gross receipts to six percent.

The team also got a $32,500 annual credit to pay approximately two-thirds of the Indians’ costs in hiring special help (off-duty police etc.).

The city also kicked in with Stadium improvements including a new press box, new and added seating with rearrangement of the box seats, refurbished rest rooms, improved inside and outside lighting, an escalator, hard-surfacing of the parking lot and construction of a Stadium Club.

At the time the new lease arrangement was approved in mid-October the season-ticket sales campaign had raised over half a million dollars in just four days. TSN reported that was the equivalent of 2,750 season tickets, compared to the 1,925 sold for the 1964 season. The goal had been 4,500 season tickets.

When the Dec. 1 ticket-campaign deadline arrived, the sponsoring Greater Cleveland Growth Board and Chamber of Commerce announced that its $900,000 goal had been exceeded by $5,051.


I never saw a follow-up to indicate whether the Anson contract was sold, or for how much.

Because of its specific baseball connection, the 1884 Chicago contract would do considerably better in a sale today. In 2013, Robert Edward Auctions sold an 1883 Chicago White Stockings payment voucher signed by Anson for $8,888.

In 1884, Anson's team finished fifth in the eight-team National League. Anson batted .335 and led the league with 102 RBIs.