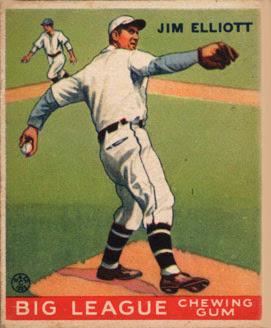 In 1943 former major league pitcher Jim (Jumbo) Elliott was indicted in the lynching of a black man. The story has similarities to events in the news in recent years.

James (Jumbo Jim) Elliott, former pitcher with the Browns, Dodgers, Phillies and Braves, who made his last Organized Baseball appearance with the Indianapolis American Association Indians in 1936, was one of 13 named in an indictment in East St. Louis, Ill., July 14, in connection with the killing of a Negro by a mob near Paris, Ill., last Oct. 12. The victim, James Edward Person, 33-year-old former soldier, is alleged to have been shot to death by a posse which pursued him across the Indiana-Illinois state line after residents of Vigo County, Indiana, had been aroused by circulation of false rumors concerning him. Elliott was a deputy sheriff of Vigo County when the killing took place.

Person’s lynching was immediately precipitated by a complaint by a local woman who told the sheriff that she had been “bothered” by a black man who had come to her back door looking for work or a handout.

Person, from Somerville, Tenn., was an honorably discharged veteran who was said to have been living in the woods in the vicinity of the Indiana-Illinois border. He was reported to have upset a number of white families in the area (the area was all-white) by peering into windows.

Vigo County Sheriff James Trierweiler formed a posse including some deputies and nine local farmers and set out in pursuit of Person. According to the federal indictment, the sheriff authorized the posse to shoot Person on sight.

Spotted on the Indiana side of the border, shots were fired and it was believed Person had been hit, but he continued his flight and crossed over into Illinois.

The vigilantes again caught up to Person as he was standing in a farmyard, eating a turnip and talking to the farmer. The posse pulled up in two cars and piled out. The farmer advised Person not to run, but he took off towards the woods and was cut down in a hail of bullets. There was no indication he was armed at the time.

Of the 13 men indicted by the federal grand jury on a charge of conspiring to deprive Person of his civil rights, nine stood trial. Each pleaded nolo contendere and was fined $200 and court costs. The Vigo County sheriff, two deputies (one was Elliott) and a retired deputy were not tried, as they had not been at the scene of the actual shooting.

The $200 fine handed down seems like a slap on the wrist for cold-blooded killing, and it was. However, according to contemporary accounts, at that time the maximum penalty on the federal charge was a $1,000 fine and/or a year in prison.

Elliott was traded to the Phillies in the 1930 post-season in deal that brought Lefty O’Doul to the Robins. In 1931 he led the National League with 19 wins. 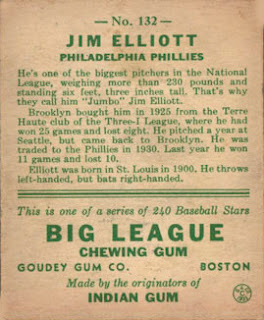 The Phils sold him to the Braves early in 1934 and he was, in turn, purchased by Atlanta of the Southern Association in mid-June.

He finished the 1934 season with Columbus in the American Association and ended his playing days with Indianapolis.

After retiring from baseball at age 35, Elliott had settled in Terre Haute, Ind., where he owned an automobile garage. In 1941 he was appointed as a deputy sheriff in Vigo Co.

Elliott served for 25 years, rising to the rank of chief deputy. In 1968 he ran for sheriff of Vigo County as a Democrat. His opponent was former college, Olympic and NBA basketball star Clyde Lovellette, on the Republican ticket. The race attracted special interest because of the size of the candidates; Elliott was 6’3”, 250 lbs., Lovellette was 6’10”, 235 lbs. Lovellette won the election.