While reading microfilm of 1964 Sporting News recently, I found a short article that brought back childhood memories -- NFL Coke caps.

I didn't make note of which issue this appeared in, but here's what TSN had to say . . .

Something new is going on with the bubble-gum and Coke crowd.
The junior sports executives who can so casually trade Mickey Mantle for Willie Mays in straight player deals are branching out. Any day now, Y.A. Tittle may go even up for Jimmy Brown.
Where it used to be Topps, now it has also become tops.
The Same wheeler-dealers who have been having fun trading Topps bubble-gum cards, now can trade for a new kind of tops—Coke tops, that is.
Starting with the new pro football season, the fad for your lad will be “stocking caps.” Not the kind you pull down over your ears for those wintry days at the local pigskin palace, but the kind that adorns the top of your Coca-Cola bottle.
In a “Go With the Pros” promotion, the Coca-Cola company hopes to start a new national collecting mania wherein pictures of players in both the National and American Football Leagues will appear under the bottle crowns.
There will be more than 900 pictures, and local bottlers will offer various prizes for complete collections. The youngsters will be given charts to fill in all players on teams in their areas, depending on whether they live in NFL or AFL territory. For others who do not live in professional football areas, there will be all-star sets.
It’s enough to make a youngster flip his lid.
Or snap his cap.
Or maybe even pop his top.

I was 13 years old when the Coke football bottle caps were introduced. I had pretty much abandoned card collecting by then, but I liked the caps and made an effort to collect them.

I suppose Coke was a dime a bottle back then . . . too expensive for me to buy many bottles of pop just for the caps.

However, I soon figured out a way to score the caps without buying the bottles.

Most of the neighborhood grocery stores -- there was one about every two or three blocks -- in those days had a pop machine out front, usually a Coke vendor.

When you opened a bottle of pop with the opener on the front of the machine, the cap fell down a chute and was collected in a bin below. I spent a lot of time that autumn "fishing" the caps out of the machines. 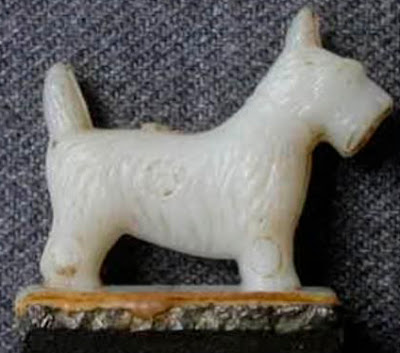 By tying a string between the legs of a plastic Scottie dog magnet, I could lower the magnet into the cap chute and pull up the caps one or two at a time. The weight of the magnet beneath the dog's feet allowed it to drop fairly straight, though you had to be careful to keep it centered so the magnet wouldn't stick to the sides of the chute.

I amassed a goodly trove of those football caps, concentrating, of course on Green Bay Packers. I don't recall now whether I had a complete team set. I also don't remember having a cap-saver sheet, though I'm sure they were available free for asking at the store's front counter. 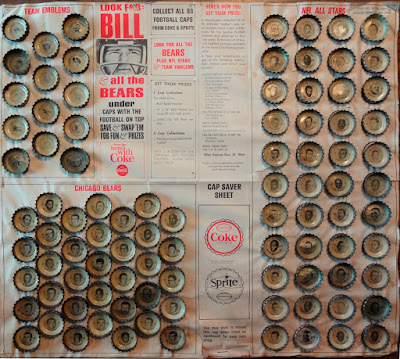 Looking at images of the sheets, I see that complete 93-cap collections could be redeemed at local bottling plants for such prizes as a team bobblehead doll, a large pennant with team photo, a coach's cap or, for five sets, an "autographed football."

In recent years I've thought a time or two about starting a new collection of those Coke caps, since they are widely available on eBay and the original saver sheets are also seen there. However, I'm trying hard to divest myself of my sports "stuff," so I guess I'll resist that urge.