One of the features I enjoy finding when I’m reading microfilm of back issues of The Sporting News are the roundups the beat writers would sometimes do about what a team’s players had going on in the off-season.

These features are a nostalgic look back at a time when even the game’s biggest stars had to work off-season jobs to supplement their baseball salaries and/or keep in shape.

Bob Hendley: Returned to Macon, Ga., where he was in pursuit of a degree at Mercer College, where he was an English major, minoring in sociology and physical education.

Juan Marichal: An expert skin-diver, had purchased an expensive underwater camera and was going to photograph sharks for a Dominican Republic magazine.

Willie Mays: Postponed a European vacation for a “lucrative contract” from a bus company to conduct baseball clinics for kids in a dozen California cities. After the tour, he’d return to his promotions job at Golden Gate National Bank.

Duke Snider: Retired after 17 years as a player, he returned to his avocado farm and bowling alley in Fallbrook, Calif.

Billy Pierce: Also retired after the 1964 season after being in the big leagues since 1945. He bought a partnership in an auto dealership with offices in Chicago and Eau Claire, Wis.

Billy O’Dell: A “gentleman farmer” with 150 acres at Newberry, S.C., where he had 18,000 Christmas trees and was looking to expand into beef cattle.

Jose Pagan: After suffering on off year at shortstop was returning to Puerto Rico for an eye operation.

Ken MacKenzie: Kept a diary all season on “the trials and tribulations of a fringe pitcher commuting from the minors to the majors.” The Yale graduate was going to his grain farm near Dayton, Ohio, to put the diary into book form.

Chuck Hiller: Was an off-season bailiff in the McHenry County sheriff’s office at Johnsburg, Ill., where he worked with delinquent boys.

Jim Duffalo: Went back to his home in Dubois, Pa., to look for winter work.

Bob Shaw: Was a “real-estate tycoon” in Jupiter, Fla., where he owned two industrial buildings and a medical center. In his off hours he played golf and hunted. 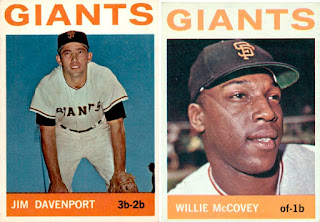 Jim Davenport: Studying for California exams to get an insurance agent’s license so he could go to work for former teammate Stu Miller in the firm of Miller & Merrick of San Carlos, Calif.

Willie McCovey: Signed on with Simons Hardware as a good-will ambassador for the company’s stores in Oakland, Reno and Walnut Creek.

Hal Lanier: Returned to his parents’ home in St. Petersburg, Fla., where he hoped to enroll in junior college; he’d been unable to get in the previous off-season.

Jim Hart: Had a job selling suits in a men’s clothing store in Hookerstown, N.C.

Cap Peterson: Returned to Lutheran Pacific College, Tacoma, to resume his studies for an unspecified degree.

Ron Herbel: Going to work in public relation and sales for the Slyter Chair Mfg. Co. of Tacoma.

Gaylord Perry: Went back to Williamston, N.C., to look for a winter job – “any kind of job.”

Tom Haller: Sold Pontiacs for a dealership at Burlingame, Calif.

Del Crandall: Having taken up residence in Atherton, Calif., was looking for work in the public relations or sales fields.

Orlando Cepeda: Went back to his native Puerto Rico where he planned to play about 25 games in the winter league there.

Bob Bolin: Having struck out 13 Cubs in his last mound appearance for S.F. on Oct. 2, was going back home to Hickory Grove, S.C., to spend the off-season fishing.