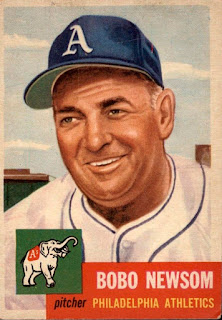 While reading early 1963 issues of The Sporting News the other day, I found an item that baffles me.

It has been my sense that throughout that period itinerant pitcher Louis  "Bobo" Newsom was a well-known, well-liked "character" in professional ball.

There weren't many issues in which you wouldn't find Newsom's name in connection with salary wrangle or a trade rumor. Perhaps he had been a favorite of the sporting weekly's editors or was oft-cited by the beat writers because he provided color to their columns.

What I read in the Jan. 5, 1963, issue of TSN, however, gives me pause to think that my assessment of Newsom's popularity has not been well-founded.

In his Bob Addie's Atoms" column, Washington baseball writer Bob Addie reported just a month after Newsom had died on Dec. 7, 1962, that the only "baseball man to attend Bobo Newsom's funeral in Orlando was former teammate Sid Hudson."

Addie added, "And, incidentally, Newsom, who won 211 victories in his career, belongs in the Hall of Fame. He was colorful and he was courageous on that mound."

Though he was a four-time All-Star, he led his league four times in losses. He sometimes also led in games started (4X) and completed (2X), as well as innings pitched, batters faced and other indicators of durability.

No doubt, if he hadn't usually been pitching for second-division teams, Newsom's won-loss record would be much rosier.

Newsom came to the majors in just his second season in pro ball, at age 21 in 1929. Here's the summary of his major league travels:


Prior to, and in among, those major league stops, Newsom played in nine minor league seasons:

My best wild-ass guess in that in all his travels, Newsom had 1,000 or so teammates and dozens of owners, managers, general managers, coaches, etc. In the Baltimore Orioles' inaugural AL season of 1954, Newsom hosted the team's Blue Ribbon (bread, not beer) Knot-Hole Club for kids and the pre-game television broadcasts.

You can read a good career bio of Newsom written by Ralph Berger for SABR at Bobo Newsom . The tone of that biography leaves me all the more puzzled about the lack of baseball's representation at his funeral. 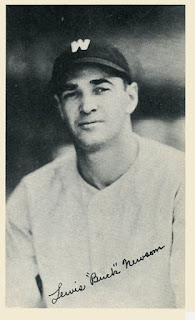 For his 25+ years in pro ball, much of it in the heydays of bubblegum cards, Newsom was under-represented, at least so far as mainstream baseball cards.

His first issues were in 1936, when he appeared in Goudey's game-card set. That year he was also included in Goudey's "Wide Pen" and National Chicle's "Fine Pen" premiums. 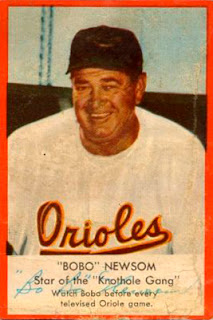 His next card was in the Topps 1953 set. This is a memorable card from my childhood. While Topps (and Bowman) had a sprinkling of "old guys" in their card wars years of the early 1950s, most of the white-haired gents were managers or coaches, but the '53T recognizes Bobo as "Pitcher".

The real stumbling blocks to putting together a Bobo Newsom player set are cards on which he appears in 1954 and 1955 in the Esskay hot dogs Baltimore Orioles team sets. Even in typical wretched condition, those rare regionals can set you back several hundred dollars.

Besides baseball "cards" Newsom was included in a handful of team-issue photo pack issues such as 1948 Giants and 1940s-1950s Philadelphia A's.

In both 1960 and 1961, Newsom was included in Fleer's "Baseball Greats" issues. Since 1981, he can be found in eight or ten inexpensive collectors' issues.

Perhaps as I read deeper into the 1960s issues of The Sporting News I'll get a better feel for what, to me, is the mystery of baseball's snub of Bobo Newsom.

In his column in the Feb. 2 issue, Addie reported receipt of a "gentle correction" from Tigers coach George Myatt, who also attended Newsom's funeral. Myatt indicated to Addie that there he saw "many baseball people" at the proceedings.