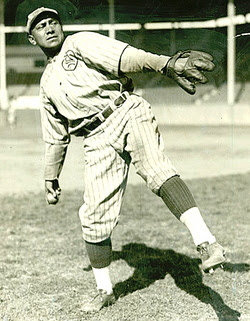 (Editor's note: This is the first of a three-part series about Moses Yellowhorse, a hard-throwing, hard-drinking young phenom whose professional baseball career in the 1920s was short, but colorful. I originally penned this as a feature article in Sports Collector's Digest around 1994, and have updated it just a bit.)


While it may or may not be true that he was the first full-blooded Indian to play in the major leagues, certainly no major leaguer prior to his day ever had a name that sounded more Indian than Moses Yellow Horse, the Pittsburgh Pirates relief specialist of the early 1920s.


From Louis Sockalexis, the Penobscot who put the "Indian" in Cleveland Indians in 1897, to Jim Thorpe and Chief Bender, the Native American had been sporadically represented on the rosters of major league teams in the years prior to World War I.

In 1914, a writer with the Cincinnati Times-Star made the observation that at least 75 percent of the Indians playing major or minor league baseball were of the Algonquin-Iroquois nations, "the tribes which specialized in the rough ball game beloved by the red men and were superior to all others."

The writer found it curious that these tribes represented only about 25 percent of the Indian population yet provided the vast majority of baseball-playing Indians and "excepting in the case of Chief Meyers, the best of the aboriginal stars, as well."

The Indian who would play big league ball in the early decades of the last century had to overcome considerable racial stereotyping. Neither Sockalexis nor Thorpe had done much to dispel the image of the drunken, lazy Indian, and even the best of the Native American ballplayers, Chief Bender, had enough episodes of "breaking training" as to negate his value as a "credit to his race."

This poem, published circa 1915 in the Pittsburgh Post, is typical of the perception of the Indian ballplayer in that era:

I would not be a regular
And labor for my kale;
I'd like to have an easy time
And still keep out of jail.

In many ways, the baseball career of Moses Yellow Horse (the baseball press tightened it up to Yellowhorse, which will be used here as it is how he was best known in baseball) was typical of the Indian ballplayer of his era: a few stellar seasons in the minor leagues, a modicum of success in the big show, some colorful press and then a slide back through the minors. Tragically, that he drank himself out of baseball was also too typical of the Indian ballplayer in that era.

Yellow Horse was born in 1898 on the Pawnee reservation in Oklahoma. The family name was derived from a famed yellow pony of tribal lore said to have had exceptional ability in the buffalo hunt. He spent his early years on his father's 160-acre farm, where he developed his pitching arm by throwing stones at rabbits and squirrels for the stew pot.

At age 18, he tried out for the varsity nine of the Chilocco Indian School. He spent the 1916 season shagging fly balls, but in 1917 became the school's star pitcher on a record said to be 17-0. Yellowhorse played some semi-pro ball for Ponca City and in the Sunday "horseback league" traveling around Oklahoma.

He made his Organized Baseball debut with the Des Moines Boosters of the Class A Western League in 1918. League play was cut short by poor attendance and World War I manpower needs on July 7. Records show Yellowhorse gave up four hits and a pair of walks in four innings of work over three games. He is credited with an 0-1 record, but no ERA stats were promulgated.

Yellowhorse went back to semi-pro ball in 1919, where he apparently caught the eye of Kid Elberfeld, manager of the Little Rock Travelers of the Southern Association, another Class A circuit.

At an old-timers game in the late 1940s in Little Rock, Yellowhorse professed not to know how he came to receive a Little Rock contract. "If anybody scouted me out in Oklahoma, I didn't know about it," he said. "One day I got a contract from the Little Rock ball club in the mail and with it came a check to cover my railroad fare. That was all. I just cashed the check and went ahead. I got off the train at the Rock Island depot and asked my way downtown and then to the ball club office and reported to Mr. Bob Allen. I hadn't signed my contract yet, but I did soon afterward."

Latter day Little Rock baseball writer Bill Bentley said. "Yellow Horse had a tremendous arm, and he knew it. Didn't have a curve, didn't need one. Just threw that fast ball past them. But he was green. He didn't know much about pitching. He had to learn some things and Kid Elberfeld was just the man to teach him. Under his crusty exterior the Kid had the heart of a school teacher. He really liked to teach baseball to kids."


It's possible that Yellowhorse was recommended to the Travelers by Bill Wano, the team's first baseman who had played with Yellowhorse on the Chilocco school team. Besides Wano, the Travelers featured two other Indian players during the 1920 season, Joe Guyon, a well-known college football player (and future football Hall of Famer), and Casey Smith, a pitcher who had come to Little Rock from the Pacific Coast League under the cloud of gambling suspicions.

Yellowhorse joined the team well into spring training. "They had already been at work three weeks and were way ahead of me in condition," Yellowhorse told Bentley. I didn't do so well in the spring. I had to get in shape and learn things."

In his spring training report, "A.W.P.," the Little Rock correspondent for The Sporting News, commented about the number of Indians on the team (this was prior to Smith's arrival), in an article headlined, "Redskins whooping it up for Elberfeld," "Three aborigines on one team is about as strong as any baseball club ever went, but then we are right here on the border and ought to pick them up if any one does."

The TSN writer had this to say about the Pawnee pitcher, "Yellow Horse is a raw recruit, but my, what smoke! The regulars have been batting at his smoke ball for several days now, and not one of them goes to the plate with a thought other than what would happen if the old apple should connect with a bean. The Indian has a sweet curve, too, and were it not for the fact that there were so many finished pitchers hanging around, Yellow Horse could be expected to stick. Elberfeld has taken quite a fancy to him, and it is possible he will yet beat out some of those who are counted on."

Yellowhorse did make the team and proved to be a valuable addition to the squad. In mid-July he contracted malaria fever and returned to his home to recuperate, but came back strong a couple of weeks later. "Well along in the season," he later said, "I was all even, seven won and seven lost. But after that I didn't lose any. Won 14 games out of 15 and tied in the other." One of Yellowhorse's late-season wins was that which clinched the first-ever Southern Association pennant for Little Rock.

For the Travelers in 1920, Yellowhorse had appeared in 46 games, winning 21 and losing seven, the best winning percentage of any pitcher in the league with more than 15 games. In 278 innings, Yellowhorse gave up 255 hits and 115 runs. He walked 55 and struck out 138. Earned run averages were not calculated by the S.A. that season, but his entry at baseball-reference.com, calculates his ERA as 3.72.

At the plate for Little Rock in 1920, Yellowhorse hit .222 in 99 at-bats. He had three doubles and scored six runs, but showed no power or speed.

Between Sept. 19-28, Little Rock and Fort Worth of the Texas League conducted a post-season series for the Class A minor league championship of the South-Southwest. Fort Worth won the series 4-2. Yellowhorse started the second game, but left very early in the 4-3 Little Rock loss. He returned to the mound two days later before the home crowd and went the distance in a 5-3 win, striking out seven. Yellowhorse also got the win in a 4-3 game on Sept. 25, tying the series at 2-2. Yellowhorse appeared in 2/3 of an inning in relief during the final game at Little Rock on Sept. 28. He gave up no hits and struck out one, but the Travelers lost the series, leaving 12 men on base in the 4-2 loss.

(Editor's note: This series will pick up tomorrow as Moses Yellowhorse makes his major league debut. For another biographical look at the Pawnee pitcher, see Ralph Berger's article in the Society For American Baseball Research's bio project at: http://sabr.org/bioproj/person/c3f353f4)