(Editor's note: This is the second of a three-part series begun yesterday.) 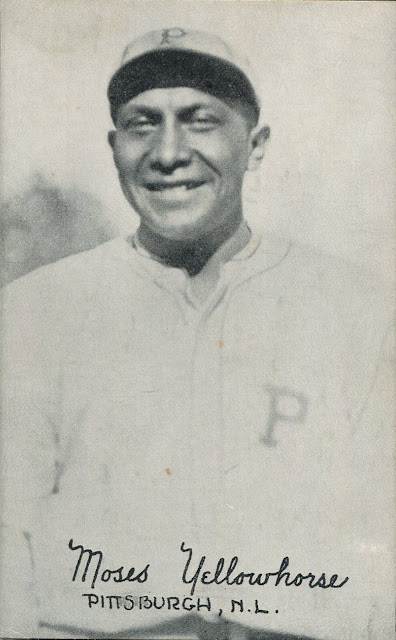 The only major league baseball card on which Moses
Yellowhorse can be found is the 1922 Exhibit Supply Co. issue.


On Sept. 16, 1920, Moses Yellowhorse's contract was purchased from Little Rock by the Pittsburgh Pirates, who were closing out a fourth-place season. "A.W.P.," a baseball writer covering the Southern Association, commented in The Sporting News, "The sale of Moses Yellowhorse to Pittsburgh was rather unexpected, not that the Indian is not worthy of advancement, but it was generally expected that the young Pawnee would be allowed to remain another season here. Yellowhorse is sure to make good. He is a close student and soaks up every ounce of information that is given by a wise manager. The Indian will keep National League batters swinging with one foot free when he is on the mound. He has terrific speed, but wonderful control of it. He also has a good curve ball and controls it equally as well as his fast one."

It was later revealed that Yellowhorse's purchase by the Pirates had been a ruse to prevent his being drafted from Little Rock. The Pirates were to have returned him to the Travelers for 1921. The Indian showed so well in spring training with the Bucs, however, that manager Moon Gibson insisted on keeping him for the season.

Early in the season, a large photo of Yellowhorse appeared on Page 1 of The Sporting News under the headline, "Lo, the Indian Reappears." The caption read, "The 'native stock' American has furnished the 'national game' some shining lights in its day, but the Indian seems to have lost caste in the recent years with major league managers. A new entrant appears this season in Moses Yellowhorse and on his early showing with the Pittsburgh Pirates he may sculp his name in the Hall of Fame along with Bender, Meyers and others of his race famous in the past. He made such an impression on Manager Gibson in training camp that the leader of the Pirates insisted that he should be retained, whatever price might be asked for his release. Gibson's judgement seems justified, for Yellowhorse in such brief trials as he has had indicates he is worth any sort of money to a club that needs just one more winning pitcher on its staff to make it a pennant favorite."

Other writers were mixed in their pre-season reviews. One anonymous scribe in the March 19 Sporting News said, "Pittsburgh critics are comparing Moses Yellowhorse, the Indian pitcher Barney Dreyfuss bought from Little Rock, to Chief Bender. All he lacks is Bender's size, stuff and disposition. He's an Indian, with two legs and two arms. Not a bad pitching prospect at that, however, but hardly a Bender."

Long-time New York baseball writer Joe Vila described Yellowhorse as, "strongly built, well educated and smart. He has an exceptional knowledge of baseball strategy and is eager to remain in fast company."

Yellowhorse opened his major league career with two innings of hitless relief in the premiere series at Cincinnati, earning a save. When the team returned to Pittsburgh for its home curtain-raiser on April 21, the Pawnee pitcher became the first Pirates rookie to win a home opener. The Sporting News' account of the game read: "The opening game here gave Pittsburgers a glimpse of the Pirates' aboriginal pitcher, Moses Yellowhorse, a copper-hued young giant, who looks like a sure comer.

"Yellowhorse went to the mound last Thursday after Babe Adams and Elmer Ponder had been chased. He assumed the burden under most trying circumstances, but he got right down to work, stopped the Reds' hitting, and pitched air-tight ball during the remainder of the game." The Pirates rallied to win 8-7, giving Yellowhorse his first major league victory.
"The young Indian has a free and easy delivery, and is quite methodical in his work," the TSN account continued, "He doesn't use any extended windup, and has splendid control. He has not had a great deal of experience, but it looks as if he were sure of retention, and, if he continues as he has started out, he will be a big help to the club."

One of those early press accounts nicked Yellowhorse for not being of "Bender's size," while another called him a "young giant." The Macmillan Baseball Encyclopedia lists Yellowhorse as 5'10", 180 lbs. In his prime, Bender was 6'2", 185 lbs. Yellowhorse, however, photographed large, which may have caused some confusion as to his true physical stature.

By early June, Yellowhorse was becoming a popular part of the Pirates pen. TSN reported, "Fandom here has gone wild over Moses Yellowhorse, the young Indian slabman, who has been used to date only as a relief artist. They like the young Indian's actions, and are convinced he his going to shine when given the proper opportunity.

"Walter Schmidt, the veteran Pirate receiver, has been quoted as saying that Moses has more stuff than any twirler he ever handled, and his only drawback seems to be his youth."
A Pittsburgh tradition was born with Yellowhorse's penchant for successful relief pitching appearances. It wasn't long before fans began to chant, "Put in Yellowhorse" whenever the starting pitcher faltered. The chant became so ingrained during the Indian's short career with Pittsburgh, that it survived him by many years. Yellowhorse himself related hearing the call while attending a lop-sided boxing match in the city many years later. Edward Wolfe, who wrote for The Sporting News under the name "Jim Nasium," related in a 1926 column that during a lecture at the University of Pittsburgh a professor became lost in his notes, confused and tongue-tied and that his stammering was interrupted by a student who yelled, "Put in Yellowhorse."

In a July 5 game against the Cardinals, Yellowhorse suffered a rupture which required surgical repair and shelved him for more than two months.

Presumably because of his long injury lay-off, Yellowhorse's teammates voted him only a 2/3 share of their second-place World Series money, but that was overruled by Commissioner Landis, who decreed the Indian was due a full share of $800.

Two months into the 1922 season, "Deacon" Bill McKechnie took over as manager of the Pirates. The team had been picked to win the National League pennant the previous year and was headed to a third-place finish in 1922. Much of the blame was placed on the shoulders of manager Gibson, who was accused of being unable to discipline his troops. Charges of heavy drinking against unnamed players were rife in the press. The departing skipper warned McKechnie that he would need to keep an eye on roommates Yellowhorse and "that Irish Indian" Rabbit Maranville. The hard-drinking Maranville had introduced Yellowhorse to whiskey and the two had been raising hell ever since. McKechnie devised a plan to control the pair by setting them up with him in a hotel suite while on the road.

Early on in the behavioral control experiment, the team was in Boston and McKechnie returned to his hotel room after dinner and a movie to find the merry-makers tucked in their beds. As the manager opened a closet door to hang up his coat, he was assaulted by a small flock of pigeons. Maranville cracked an eye and warned, "Don't open the other closet, Bill, the Chief's got his pigeons in there and he'd really be mad if you let them out."
McKechnie later learned that the pair had been conducting a competition by tippy-toeing out onto the 16th floor window ledge to see who could scoop up the most pigeons with their bare hands in 15 minutes. Maranville won, 8-5. McKechnie roomed by himself thereafter.

Yellowhorse had remained basically healthy through the 1922 season, save for a couple of weeks around the beginning of August when he was out of commission with tonsillitis.
On Sept. 26, Yellowhorse was called upon to pitch against the Detroit Tigers in an exhibition game at Detroit. In a 5-4 loss he plunked Ty Cobb so severely that the Georgia Peach had to be carried off the field.

In December, Yellowhorse was traded to Sacramento in the Pacific Coast League with three other players and $7,500 for a pitching phenom named Earl Kunz (whose entire big league career was with the Pirates in 1923, for whom he was 1-2 with a 5.52 ERA in 21 appearances).


(Editor's note: The series will conclude tomorrow with Yellowhorse's return to the minors.)