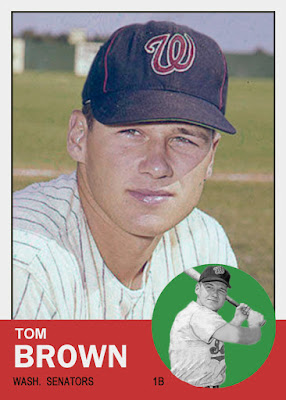 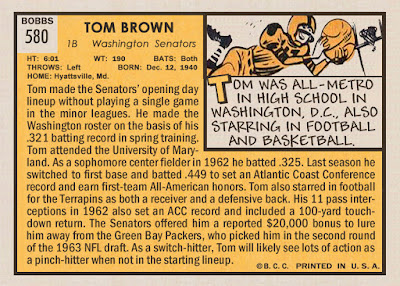 Fifty years ago, when salaries in professional baseball and football weren't what they are today, the two-sport pro was much more common than today.

One such ballplayer was Tom Brown, who played briefly for the Washington Senators in 1963 and then switched to the gridiron, where he played five years for the Lombardi dynasty Green Bay Packers and a one-game year, 1969, with the Washington Redskins, also playing for Vince Lombardi.

I’m not going to delve too deeply into the nuts and bolts of Tom Brown’s dual professional careers.You can read the statistical highlights on the backs of my custom 1963 Topps-format baseball card and 1968 Topps-style football card.

Tom signed with the Washington Senators on Feb. 28, 1963, out of the University of Maryland for a $20,000 bonus. The Senators seemingly had to pay the big bonus to lure Brown away from a career in professional football. On Dec. 1, 1962, The Buffalo Bills had picked him 20th overall in the third round of the 1963 AFL draft. Two days later, he went in the second round, 28th overall, of the NFL draft, chosen by the Green Bay Packers.

I found it interesting that Brown was able to make the jump to the major leagues with assists from Fidel Castro and John F. Kennedy.

Because of the deteriorating situation between Cuba and the U.S. during the early years of the Communist revolution, and with a helping hand from the White House, Brown got an unexpected opportunity to open the 1963 season at first base for the Senators.

In the off-season, Washington had acquired first baseman Rogelio Alvarez from the Reds, intending him to replace the aging Harry Bright on the initial sack. (Why they wanted a .189 hitter with no power is puzzling).

Because of the political situation in Cuba, the Senators had sent a contract with salary unspecified to Alvarez there. Morris Siegel, baseball writer for the Washington Evening Star, explained the unusual contract, “Fidel Castro has a nasty habit of cutting himself in when the pot is big enough.” When Alvarez was temporarily unable to get himself out of Cuba, the Senators sent him back to the Reds.

Enter President John F. Kennedy. Just prior to the opening of the 1963 season, Senators general manager George Selkirk went to the White House for the ceremonial presentation of a season’s pass to the president.

Kennedy said he’d be glad to throw out the first ball on opening day . . . providing “that boy from Maryland” was in the lineup. Accordingly, when the Senators opened the season on April 8 at D.C. Stadium, Brown was Washington’s starting first baseman.

Brown went 0-for-2 that day against the Orioles. In fact, he went 0-for-15 before getting his first major league hit on April 25. Batting just .100 through the first three months of the season, Brown was sent down to AA York in the Eastern League, where he hit .228.

Called back up with Washington in September, mostly pinch-hitting and playing left field, Brown upped his career batting average to .147 by going 9-for-36.

A cynical person might wonder whether the Senators brought Brown back to Washington to keep him out of the hands of the Green Bay Packers.

By that time, however, Brown had determined to forego pro football to try to make a go of baseball. It’s said he made that decision while he was on the Green Bay sidelines for the Dec. 30, 1962, NFL Championship game at Yankee Stadium, watching the big bodies fly around and collide violently in 25-degree weather.

Brown was again in York for the 1964 baseball season. When he was able to bat just .217 with four home runs in 59 games, he decided to accept the blandishments of the Green Bay Packers and turned his attention to professional football.

For five seasons he played in every game with Green Bay, at safety and as a punt returner.
He won an NFL Championship ring in 1965 and Super Bowl rings in 1966 and 1967.

In 1968 he scored two touchdowns; one a 52-yard punt return and the other a 22-yard fumble recovery. He also led the team that season with a 6.9-yards-per-return and four interceptions for 66 yards.

He closed out his NFL career with the Washington Redskins. On Feb. 27, 1969, new 'Skins head coach Vince Lombardi made Brown his first trade with the new team, giving up an undisclosed draft choice.

Brown was eager to play in Washington, where he had a successful insurance business, and to reunite with Lombardi. He played only one game in 1969, before a chroic shoulder injury sent him to the sidelines for good.

In retirement, Brown operated a non-profit youth sports training program called The Rookie League, helping to develop youngsters' baseball, football and basketball skills. Earlier this summer, he retired from that, too.

Despite the short duration of Brown's baseball career, he made it onto one mainstream baseball card, in the 1964 Topps set.
Though he played in the NFL for six seasons, he never appeared on a football card. 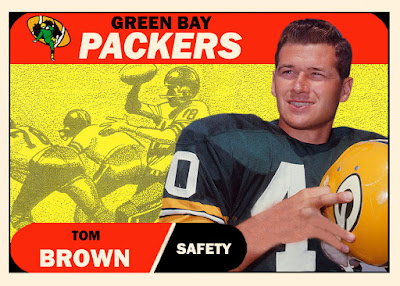 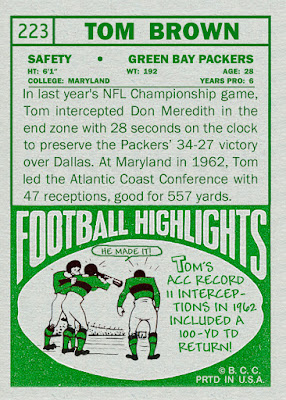