(Editor's note: This concludes a three-part series, picking up the story of Moses Yellowhorse, who was traded from the Pittsburgh Pirates to Sacramento in the Pacific Coast League following the 1922 season.)


A review of the coming 1923 P.C.L. season in The Sporting News allowed as how Yellowhorse "ought to do good on the Coast, provided he keeps himself in condition." That was a 1920s euphemism for staying away from the bottle.

With Yellowhorse as the staff ace, Sacramento raised itself from last place in the Coast League in 1922 to second place in 1923. The Chief pitched in 57 contests, including 19 complete games. His record was 22-13 with an ERA of 3.68. Yellowhorse put in 311 innings of work for the Solons, walking 79 and whiffing 99. The 351 hits he surrendered gave the league a .293 batting average against him.

With the glove, Yellowhorse fielded in about the bottom 25% of P.C.L. pitchers, typical for his career. Yellowhorse's season at bat was also fairly typical, he hit .168 with only three doubles, two RBIs and 14 runs scored in 113 at-bats.

In the first month of the 1924 season, Yellowhorse suffered a serious injury to his pitching arm. Sacramento was carrying an 18-5 lead into the bottom of the ninth inning at Salt Lake City when the home team began to rally. With cozy fences and the high altitude, the lead was by no
means safe and Solons manager Charley Pick began going through his bullpen.
When the Bees had scored 10 runs, Pick told Yellowhorse, "Warm up fast, if the next batter gets a hit, in you're going." With only three warm-up pitches, Yellowhorse was called to the mound with the bases loaded, the tying run on first base. He reminisced later, "I went in and I threw just nine pitches, striking out in order John Peters, Tony Lazzeri and Duffy Lewis," and nailing down the victory.

"That was the finest job of pitching I ever did," Yellowhorse said, "But I couldn't raise my arm the next day. Jack Downey was the trainer but he couldn't stop the pain."

Yellowhorse apparently resorted to heavy applications of 80-proof pain relief. By mid-June, The Sporting News reported, "Chief Moses Yellowhorse has gone the way of all bad Injuns. The Chief would not keep in condition, and was no longer of use to the team, so he was sold to Fort Worth, Texas. The Chief is his own worst enemy. He has the ability to be a big league pitcher, but lacks the inclination to keep in shape to pitch."

Less than a month later, his right arm unable to come around, Yellowhorse was sent back to Sacramento by Ft. Worth, apparently never having appeared in an official game.

In early May of 1925, Yellowhorse once again teamed up with Kid Elberfeld, who was managing a pitching-poor Mobile team in the Southern Association. He joined the Bears on May 5, with the team in last place.

His first outing was on the 11th, when he came on in the 9th inning to beat Little Rock, 5-4, while giving up a walk, two hits and a run. Yellowhorse lasted just four games with Mobile. Though he had a 2-0 record, in his 9.2 innings of work he gave up 14 hits, and four walks, striking out two. (Editor's note: Yellowhorse's stint with Mobile is not recorded on baseball-reference.com. If memory serves, the details provided here were taken from contemporary accounts in The Sporting News.)

Yellowhorse was apparently returned to Sacramento sometime during the season, for he appears on the team's "suspended" list in the November report of the National Association of Professional Base Ball Leagues.

In January of 1926, he was sold to Omaha, in the Western League, the circuit where his pro career had begun in 1918. Yellowhorse played in fewer than 10 games or 45 innings for Omaha; his record is not included in the league's stats. Baseball-reference.com credits him with a 1-1 record in three appearances. He was released in May, ending his professional career.

Following his playing days, Yellowhorse returned to the Pawnee reservation. He was active with his tribe, coaching youth baseball teams and umpiring semi-pro games. He also gave up drinking. In 1958 he returned to Sacramento for a brunch hosted by his old owner, Sam Gordon. He told a local newspaper, "I used to hit it up pretty good, but 13 years ago I decided I'd give up drinking. I came to that decision on my own. And I did it with willpower.

"It was quite a surprise to my old friends," he was quoted, "when I went back for a World Series. They'd almost filled a room with the stuff, and they couldn't believe it when I sat there and drank tall sodas. I've been very proud that I quit. Today I'm one of the happiest men in the world. I go here and there without fear and the people I meet and get to know have grown close to me."

Bill Conlin, sports editor of the Sacramento Union, commented, "It was a sincere and poignant moment with a once great and proud athlete, who carries the blood of warriors. Yellow Horse, in gaining humility has attained a new measure of greatness."

In 1947, when the Brooklyn Dodgers established a Class D minor league team at Ponca City, Okla., Yellowhorse attempted to catch on as a coach or umpire, but the best he could do was land a job as groundskeeper. In 1951, he spent the season as an umpire in the Kansas-Oklahoma-Missouri League.

Yellowhorse left Organized Baseball after that stint and took a job with the Oklahoma state highway department at Stillwater.

D. Jo Ferguson of the Pawnee Chief wrote of Yellowhorse's later years. "He worked outdoors for the state highway department and drew a fair salary and liked the work. He was always very friendly to both his white and Indian friends and made a fine appearance anywhere. They tell me that he drank considerably although I never saw him drunk. He had the physique of a 35-year-old athlete. I never knew him to look sloppy."

At the tribe's annual homecoming celebrations, Yellowhorse served as arena director, assisting the 300 costumed native dancers in their performance before crowds of up to 6,000 visitors. His picture was used on a promotional brochure produced by the tribe, confirming his status as his people's most famous athlete.

According to Ferguson, during the homecoming festivities, "He was always introduced to the crowd and always wore street clothes. I never saw him in an Indian outfit. Maybe he didn't dance."

Ferguson summarized Yellowhorse's status within the tribe thusly, "They would not hold him aloft as a mighty warrior but loved him for the honor he gave the tribe. At the same time they could not forget the added honor he could have brought them had he left the fire water alone."

On his 66th birthday, in January, 1964, Yellowhorse was honored by his tribe with a feast and war dance. A few months later, on April 10, he died of an apparent heart attack.
Following funeral services and preceding a traditional tribal mourning feast, Yellowhorse was buried in the North Indian Cemetery in Pawnee. He had never married and was survived by only a half-brother. 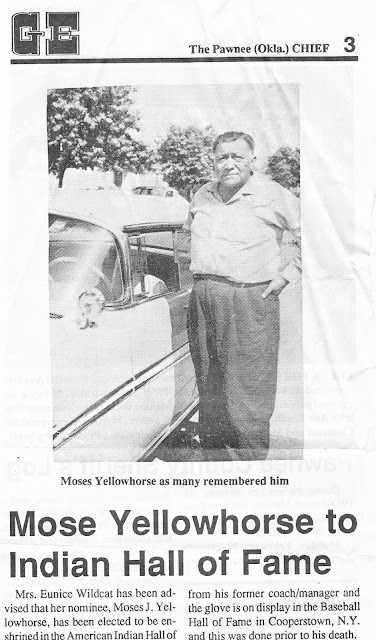 This photo, depicting Moses Yellowhorse in later life,
when he was a respected member of the community
at Pawnee, Okla., was published in 1994, on the
occasion of his posthumous induction into the
American Indian Hall of Fame.

(Editor's note: Check in tomorrow for some personal reflections on my 1994 visit to Pawnee, Okla., and a look at an unusual tribute paid to Moses Yellowhorse.)