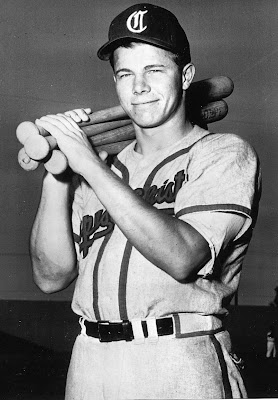 Most of us remember Kyle Rote as an important part of the N.Y. Giants NFL dynasty of the 1950s when he was the go-to receiver for Charlie Connerly and Y.A. Tittle.

The things he did to catch the football and rack up those important yards-after-catch were often a deciding factor in the epic Giants-Packers games of the era. We Packer fans would have gladly traded his cousin, our quarterback, Tobin Rote to the Giants for Kyle (especially after Bart Starr came along in the late Fifties).


Prior to coming to prominence in the NFL, Kyle Rote had a collegiate Hall of Fame career with Southern Methodist University. I recapped his college days (in 100 words or less) on the back of my 1955 All-American style custom card pictured at the bottom of this post, but there was no room for these interesting tidbits:


In the months before Rote reported to the Giants training camp in 1951 and began earning the reported $20,000 salary that a #1 draft pick commanded in those days, the San Antonio native tooks a few swings in minor league baseball. He signed with the Corpus Christi Aces of the Class B Gulf Coast League. He was given uniform #44, the number he wore at SMU.

He proved to be more than just a box office attraction, though. His hitting earned him a promotion from a pinch-hitter to a starting outfielder. He played in only 22 games, but in 66 at-bats had seven home runs, including three in one game on April 26. Team owner George Schepps said one of those homers was the longest ever hit in the Corpus Christi ballpark. Rote hit .348 with a .712 slugging average. The Aces went on to win the GCL pennant by 12 games, but by then Rote was long gone to the NFL.


In pre-game ceremonies prior to the Aces' April 11, 1951, home opener Rote participated in a football punting contest with other members of the team. But he didn't win! His 60-yard punt was bested by "spindly pitcher" Eddie Johnson, who booted the ball 65 yards.


For the ceremonial first pitch, the Corpus Christi mayor threw outa football, instead of a baseball.

Rote played his entire NFL career with the Giants. When he retired after the 1961 season he was the team's career leader in receptions (300), receiving yards (4,795) and TD catches (48). He had played in NFL Championship games four times (losing to the Colts in 1958 and 1959 and to the Packers in 1961 and earning the big ring against the Bears in 1956) .
The real measure of a man is not what he accomplishes between the lines. How he is perceived by his contemporaries is a more important gauge of the worth of a man. Rote was not only the Giants' captain for many years, but was also a force in the founding of the NFL Players Association and was its first elected president. Perhaps most telling of all, though, is that it is reported that 14 of his teammates named sons after him.

Following relatively minor surgery in 2002, Rote developed pneumonia and died at the age of 74.

I'd love to be able to give credit for the baseball photo of Kyle Rote in 1951 with Corpus Christi to the fellow collector who gave it to me, but I lost his name in a hard-drive crash of my computer last winter. He had offered the picture on eBay as Tobin Rote and received no bids. I'm sure that wouldn't have happened if he had properly identified it as Kyle Rote (it is correctly identified in the Associated Press cutline on the back). When I contacted him after the auction with an offer to buy it, he sent it to me free.

Coincidentally, I once owned a 1951 Corpus Christi team autographed baseball that included Rote's signature. I had bought it in a group of about 10 lower-level minor league balls from Texas clubs of the 1950s. I sold them all on eBay several years ago. 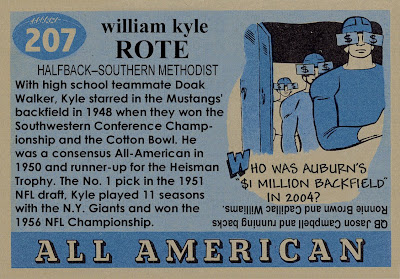 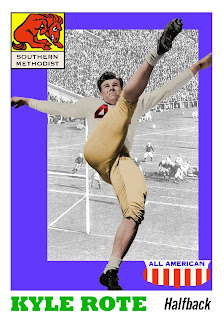