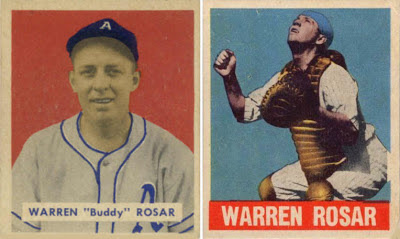 Like many collectors of vintage baseball cards, I am passing familiar with the lengthy “card wars” in the courts between Topps and Bowman in the early 1950s.

Until recently, though, I was unaware that there was an earlier baseball card court battle between Bowman and Leaf.

Four Philadelphia companies are barred from distributing pictures of players in bubble-gum wrappers, following a preliminary injunction issued in that city, May 7, on the petition of six major leaguers, on behalf of the Bowman Gum Company. The latter company claims to have the signed contracts of 272 big league players, giving it exclusive rights to use their names and photographs in the advertising and sale of gum. Players filing the petition were Warren Spahn of the Braves, Al Evans of the Senators, Elmer Valo, Sam Chapman, Buddy Rosar and Lou Brissie of the Athletics.

There was no mention in TSN of further developments.

Digging a little deeper, I found that on May 4, 1949, the Associated Press had moved on its wires a short story that specified, “The complaint charges Jack A. Bendon of   and six  distributors of gum manufactured by Leaf Brands, Inc., and Leaf Gum Co. illegally used pictures of the players.”

The AP story also included the fact Pacific Coast League players were included along with American and National Leaguers who signed contracts with the Bowman company.

I’m not adept at surfing legal web sites, so I don’t know how far through the court systems the Bowman-Leaf suit may have gone, but I did find that a “settlement agreement” between the parties enjoined Leaf from selling baseball cards “until 1951.”

Perhaps this litigation was at least partially responsible for the scarcity of the Leaf short-prints in its 1949 set.

While this information was interesting enough in itself, what I stumbled across while I was trying to find out about the outcome is mind-blowing for those of us with an interest in baseball cards of the 1930s-1960s.

Watch this blog in coming days for some never-before-seen (at least within the hobby) data on baseball card sales that could help collectors get a better handle on production numbers in that era.