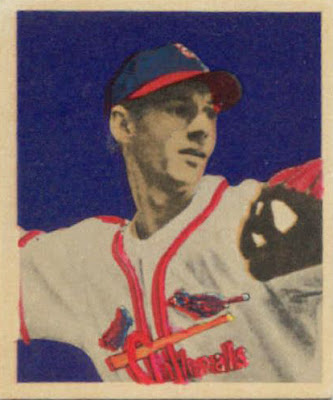 Reader Jim McKinley has made inquiry about an unusual 1949 Bowman Marty Marion card #54 that he recently acquired.

Instead of the red Cardinals cap that Marion is shown wearing on all other '49B cards, this card has a blue cap. Whether coincidentally or part and parcel of the aberrant cap color, the back of the blue-cap Marion has what McKinley describes as bleed-through of the blue ink. 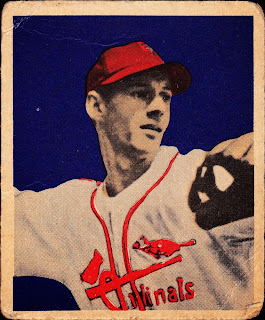 Given the thickness of '49 Bowman stock, I'm inclined to think that blue ink on back is the result of wet-ink transfer, with the sheet containing the Marion card having been laid atop a sheet of card fronts on which the blue ink had not yet dried.

Without personally examining the unusual card it's hard to say whether it left the Bowman print shop that way or whether a kid collector 60+ years ago changed the cap color.

Bowman's use of the red cap was, after all incorrect. The Cards' caps in that era were blue. 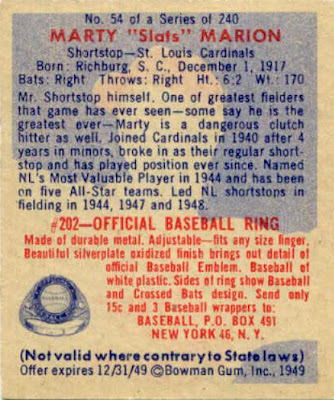 UPDATE:
I posted this mystery card on the Net54 vintage baseball card forum (http://www.net54baseball.com/). The collectors there posted these comments . . .

To me it looks like someone colored, note red glove and jersey pinstriping. (Jim65)

I agree. If the cap was printed in blue you would expect the WST back to also have a blue cap. It doesn't. (Exhibitman)

You can also see a faint red cap on the WST on the back of card which suggests the printing off the sheets had red caps when they were printed. (Andy H.)