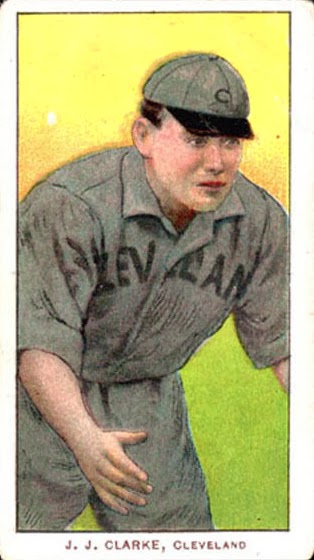 One of the most prestigious feats of home run hitting in Organized Baseball can't be verified though readily accessed official records. Fortunately a first-hand account survives in a 1947 account in The Sporting News.

In an interview, apparently supported by a newspaper box score, Clarke recounted his historic day at the plate.

Nig Clarke has seen his share of raised eyebrows.
“Well, really, Mr. Clarke,” people say to him, “you can’t expect us to believe that anyone hit eight home runs in eight times at bat in a single game.”
Yet, the prodigious batting feat is fully documented. It was in 1902 that a rookie catcher for Corsicana of the Texas League smashed the ball over the wooden right field fence eight times in a row. The catcher was Jay Justin Clarke, an 18-year-old kid from Detroit, who was to become the durable Nig Clarke of the Cleveland and three other major league clubs.
“We were playing Texarkana that day (July 11, 1902)” recalled Clarke. “I remember it as though it were yesterday. Texarkana hadn’t been drawing so the game was moved to Ennis, Tex. That’s not far from Corsicana and just a short distance from Dallas.

27 runs in First 3 Innings
“Well, sir, the stands were built on an angle. Out in right field they angled to the playing field. There was a white pole on the right field line, I’d say about 200 or 210 feet from the plate.”
Cy Mulkey was the pitcher for Texarkana that day, Clarke recalled. He was a big, rawboned righthander, who later settled down to become a sheriff in Texas.
“We got 27 runs the first three innings,” said Nig with a wink. “The first time up—I was batting seventh, just ahead of the shortstop—I pulled the ball to right field. It sailed over the fence eight or ten feet inside the white pole. The umpire waved me around the bases.”
It is Clarke’s impression that he batted four times in the first three innings, each time duplicating his first hit, a line drive over the fence near the foul line.
“Mulkey was out of there by this time, of course,” he added slyly. “Two other fellows finished—I don’t recall their names—but Mulkey walked to the hotel took his bath and strolled back to the ball park. Imagine his surprise when he saw the game still going on. It lasted three hours and 45 minutes, and the score was 51 to 3.”
When Clarke blasted his fourth straight homer, one of the spectators stepped out of the stands and handed him a $50 bill. The donor was identified by someone in the dugout as a wealthy cattleman.
The next time up he lashed another homer. By this time, he recalled, a favorable hot Texas wind had blown up. When Clarke crossed the plate, another spectator sidled up to him and thrust a crumpled $50 bill into his sweaty hand.
“He was the rival cattle baron,” smiled Clarke.
By this time the crowd acclaimed Clarke wildly each time he stepped to the plate.
“Put it right in there and let the kid hit another,” they pleaded to the beleaguered Texarkana pitcher.
“They fed the ball to me all right,” Clarke admitted. “High and on the inside. I got the sixth and seventh up in the air and the wind carried them right over the fence. The last one just got over. I’m sure it came in the ninth inning.” 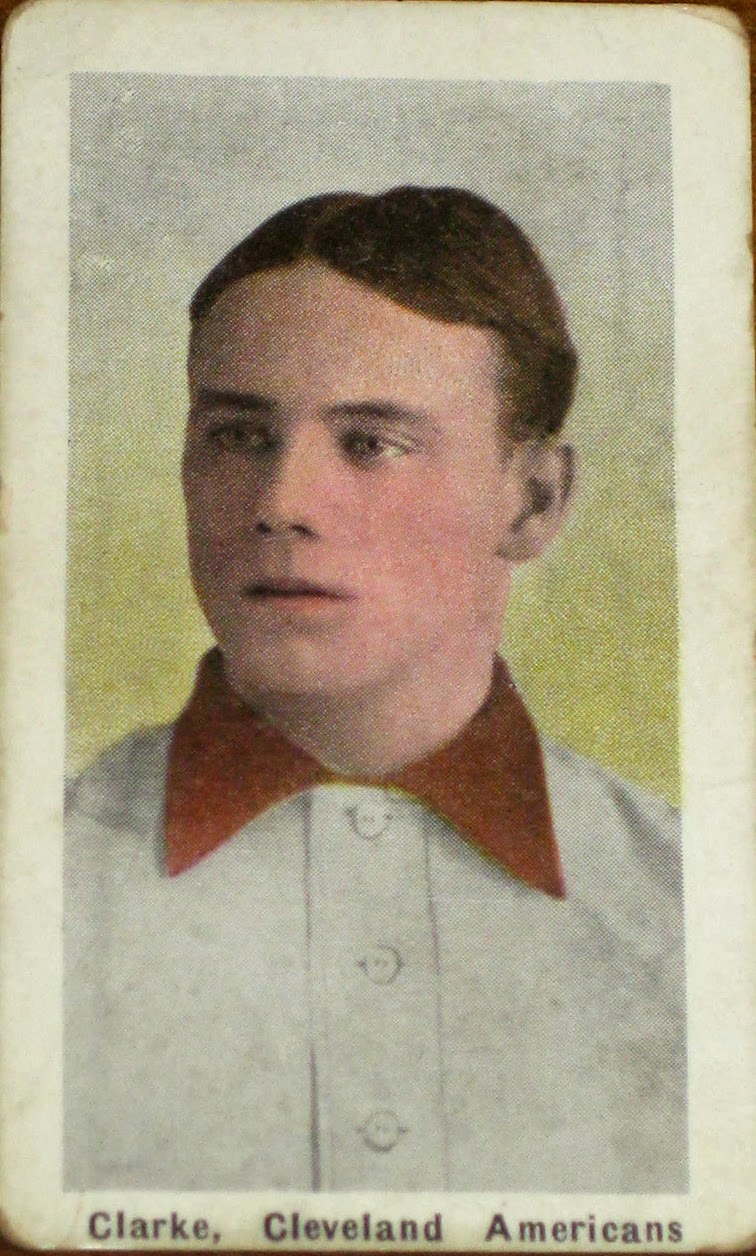 The good citizens of Ennis were not going to let this noble batting feat go unrewarded. They passed the hat and collected $85 more for that home run hitting Corsicana kid.
“That $185 was quite a windfall—more than a month’s salary,” he exclaimed. “Besides, when I got back to Corsicana, I was all set. I got enough hats and shoes and shirts to last me for years.”
As he talked, Clarke sat in the comfortable living room of his modest frame house in the Detroit suburb. The sun was beating down mercilessly. The temperature had soard into the nineties.
“It was a hot day like this in Ennis,” he said. “The ball sailed a mile.”
Clarke is a man of few pretensions. At 63 he works five days a week on the night shift of a steel plant nearby, serving as a welder’s helper.
“I just try to keep out of the way of the guys who do the work,” he chuckled.
He had to be prodded into talking about his eight home runs. He preferred to let his mind dwell on those glorious days when he was Addie Joss’ batterymate at Cleveland [editor's note: Clarke caught Joss' perfect game on Oct. 2, 1908], or in subsequent major league service with the Browns, the Pirates and the Phillies.
It wasn’t until many years later that baseball gave his epic slugging some recognition. The late Al Munro Elias came across a box score of the 1902 game. Clarke once had a yellowed clipping of the box himself, but loaned it to a friend, and it hasn’t been returned.

Mate Also Had Eight Hits
“It’s easy to remember though,” Nig said, “because of all the eights. I had eight times at bat, eight hits, eight runs, eight putouts and eight assists.”
First baseman Mike O’Connor, who batted just before Clarke, had seven hits in eight trips, including three homers. Bill Alexander, Corsicana’s keystoner, also had eight hits in eight trips, two of them homers.
“How many runs did you drive in that day?” we asked.
“I’m sure it was over 20. It seems to me there were ‘ducks on the pond’ every time I came up.”
Clarke is particularly proud of his wide travels in baseball and his two periods of enlistment in the U.S. Marines. He took time out from the game in the first World War to serve with the Marines in Europe. He returned for five more years, starting in 1921, having a hand in establishing baseball fields at Pacific outposts where soldiers, sailors and Marines played.
“I swung a bat nearly halfway around the world,” he asserted.
As for baseball travels, he claims to have played for more than 20 cities in a 25-year period. He started as a semi-pro at Adrian, Mich., while still attending Assumption Collegiate at Windsor, Ont., and finished in 1925 at Salisbury, Md.
“You seem to have traveled more than Bobo Newsom,” suggested the visitor.
“Say, that Newsom in nothing but a tramp,” he grinned. “He’ll have to go some to catch me.”
Clarke takes great pride in another batting feat. In 1906 he compiled a .358 average for Cleveland, matching George Stone of the Browns, who is recognized as the champion. Old Nig played in only 57 games.
“I beat the Frenchman (Nap Lajoie) by three points that year,” he exclaimed. “Why, I even beat out the great Ty Cobb in the batting averages that year.”
With his Marine bonus, Clarke purchased a home. His 85-year-old mother lives with him. He is still wrapped up in baseball, but hasn’t been at Briggs Stadium in three years.
“I don’t think they have the hustle they did in my days,” he remarked. “But maybe that’s a sign I’m getting old.”

For the minor league seasons between 1912-25, however, Clarke is credited with just eight home runs; never more than three in a season.