Ballplayers get the best babes -- Part 4

I presented groupings of similar photos almost exactly a year ago, in my blog of 9/9/11, and other groupings on Sept. 10 and Oct. 2 of this year.

The first citation is a real period piece -- check out the stove and the small appliances.

Do you recognize the item on the shelf, almost dead center in the picture? It's an early toaster. 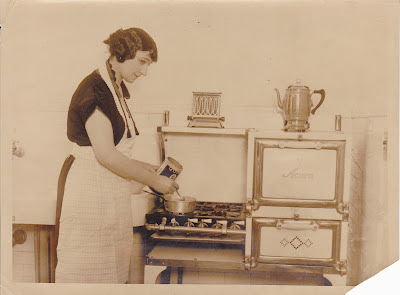 "JUMPING JOE AT HOME"
"Jumping" Joe Dugan, star 3rd baseman of the N.Y. Yankees is at home at Scarsdale, N.Y. keeping in trim for the 1925 season with plenty of work.
Photo shows Mrs. Dugan cooking his dinner.

The home cooking doesn't seem to have been an elixir for Dugan, though; in 1925 he dropped 10 points from his batting average and played in only 102 games. 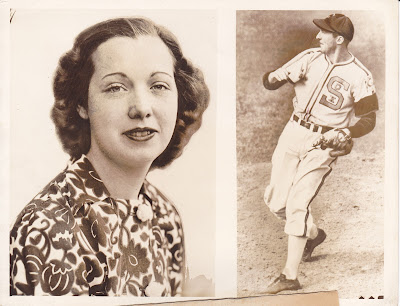 Chicago White Sox pitcher Johnny Rigney appears to have married well, in more than one sense of the word.

MAJOR LEAGUER ASKS DRAFT DELAY
Chicago, Ill.- John Dungan Rigney, 26-year-old pitching ace of the Chicago White Sox, who has asked for a sixty-day deferment from induction into the Army because he wishes to marry Dorothy Comiskey, treasurer of the White Sox and "have enough money saved to provide for her every wish during my year in service". When Paul Armstrong, Illinois Director of Selective Service, learned that a local draft board had granted Rigney's request, he appealed the case to President Roosevelt, asking a reversal. The case has set major league baseball circles agog. Shown with Rigney is his fiancee, Dorothy Comiskey.

Rigney's deferment must have stood, because he completed the 1941 with the White Sox, winning 13 games, tied for second-best on the team.

Rigney opened the 1942 season with Chicago, then enlisted in the Navy in May. He did return to baseball until the start of the 1946 season, and arm trouble kept him on limited duty through mid-1947, when he retired to work in the team's front office.

His wife became owner of the White Sox in 1956, but after two years of fighting for control with her brother Chuck, she sold the team to Bill Veeck. 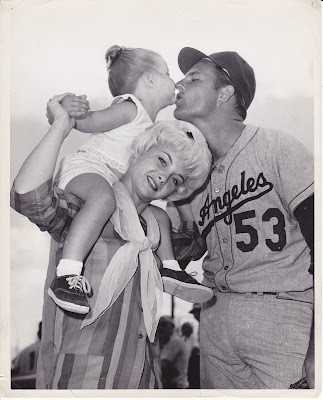 Our last photo shows Dodgers ace Don Drysdale with his first wife, Ginger Dubberly. She was a 1958 Tournament of Roses Princess and had several TV appearances as an actress in the early 1960s.

The couple was married in 1958 and divorced in 1969. Judging from the apparent age of his daughter Kelly, the photo was likely taken about 1962.