Ballplayers get the best babes -- Part 5

I presented groupings of similar photos almost exactly a year ago, in my blog of 9/9/11, and other groupings on Sept. 10 and Oct. 2  and Oct. 6 of this year. 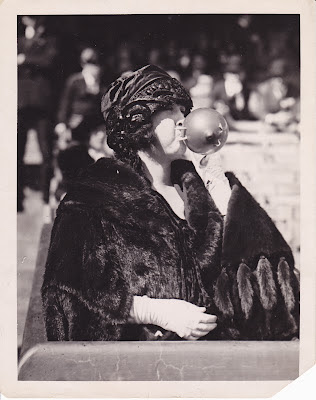 Check out this photo of Mrs. Babe Ruth in a fur (presumably mink) coat.

I'm not sure which Mrs. Babe Ruth this is. I'm guessing, from the style of the hat, that it was his first wife, Helen, whom he married in 1914.

This is a photograph from the noted baseball photographer Paul Thompson.

Penciled on back is: "First Game of World's Series / Mrs. Babe Ruth blowing a pig balloon".

By the mid-1920s, Helen had left the Babe and was living with a dentist  in Massachusetts. She died in a house fire there in 1929. 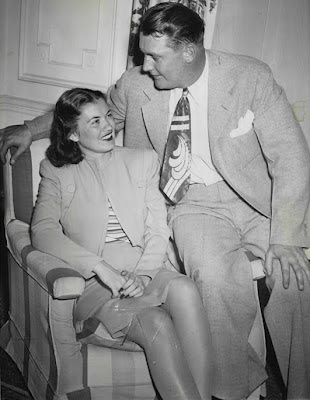 The next photo pictures Mr. and Mrs. Mort Cooper; she's the second Mrs. Cooper. The pitcher had divorced his first wife, Bernadine, in 1945. On May 16, 1946, he married Viola Dee Smallwood.

Cooper pitched that night for the Boston Braves and lost to the St. Louis Cardinals 9-8. Cooper gave up six hits (including a pair of home runs to Enos Slaughter) and five runs in six innings of work. He walked three and struck out two. 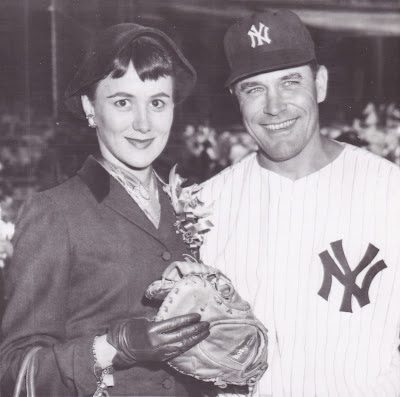 The most recent of this trio of photos pictures Yankees first baseman Eddie Robinson at Yankees Stadium on Oct. 3, 1955, prior to the sixth game of the World Series.

TO WED AFTER SERIES
Yankees' first baseman Eddie Robinson poses with his bride-to-be, Bette Farlow, 23, of Staten Island, New York, before today's Series game. Eddie was hoping Bette would bring luck to the Yankees who trail Dodgers 3-2 in current Series. They plan to wed right after Series ends.

New York did beat Brooklyn that day, 5-1, tying the Series before losing the next day.

Though he had hit .667 in three at-bats earlier in the series, Robinson didn't appear in Game 6 or Game 7.
Posted by Bob Lemke at 3:16 PM