Ballplayers gets the best babes: Part 6

I presented groupings of similar photos almost exactly a year ago, in my blog of 9/9/11, and other groupings on Sept. 10, Oct. 2,  Oct. 6 and Oct. 16 of this year. This presentation contains some of a large grouping of similarly themed press photos that were collected over the years by former colleague Tom Mortenson, who was a long-time editor of Sports Collectors Digest. 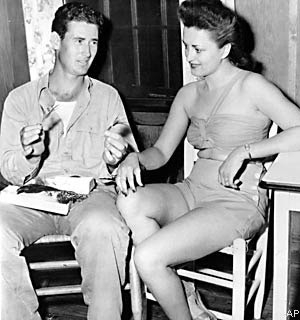 Here's Ted Williams with the first of his three wives, Doris Soule. The photo is undated. The couple was married 1944-1955. She was the daughter of Williams' hunting guide.

The marriage of All-American University of California football star and future N.Y. Yankee Jackie Jensen and Zoe Ann Olson, who medaled in diving at the 1948 and 1952 Olympics, was something of royal wedding in the sports world in 1949. 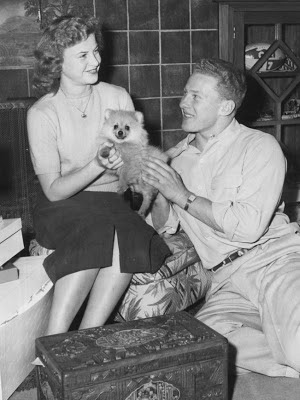 The couple is shown with their pet Pomeranian (?) in this photo, that looks to have been taken around the time of their wedding. The couple was divorced in 1968. 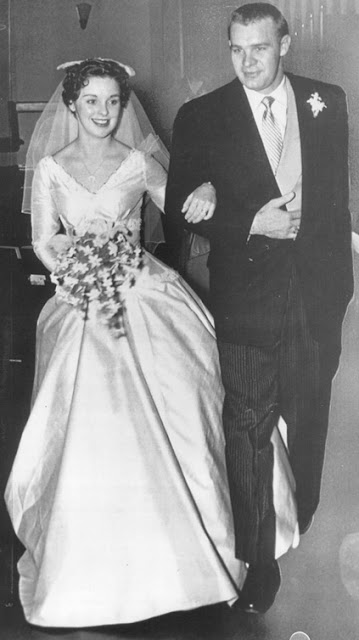 Another ballplayer that married a beauty queen was Harvey Kuenn. He was a multi-sport star athlete in his hometown of Milwaukee, Wis., and at the University of Wisconsin before signing as a bonus baby with the Detroit Tigers in 1952.

On Halloween in 1955, he married Dixie Ann Sarchet, who had been Miss Wisconsin in 1954. 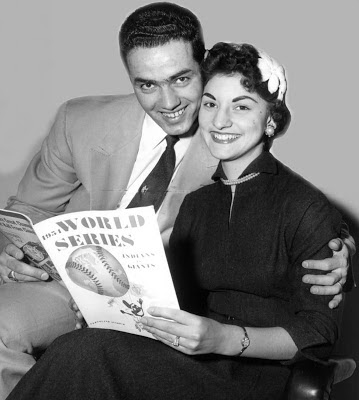 This is a photo of Rocky Colavito and his wife, the former Carmen Perroti. While the background has been airbrushed away, I'm guessing from the program in their hands that the photo was taken at the 1954 World Series between the Indians and Giants. Colavito had spent 1954 with the Indians' Class AAA farm team at Indianapolis and led the American Association with 38 home runs. He was called up to the majors in 1955.

The couple was married in 1954 is still married today.