The umbrella identifier for this on-going presentation is "Pretty Pictures." That was the title of a 1930s book of cartoons by Otto Soglow that I read and reread as a child. These photos represent the gleanings of 30+ years of throwing pictures into files during my days as a sports collector, writer, editor and publisher.

On my blog on Sept. 25, I presented a selection of modern baseball cards showing players using cameras.


On a related note are a trio of pictures from my photo files showing ballplayers behind the camera. 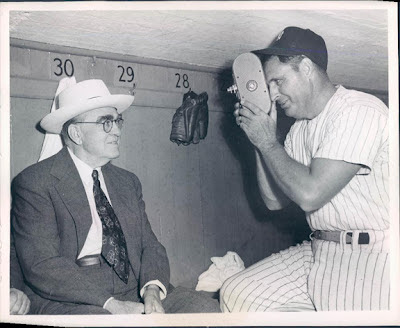 The earliest of the pictures is unmarked as to date, but certainly was taken circa 1931-36, when Ben Chapman (right, with movie camera) was an outfielder for the New York Yankees.

A bit later is this press photo of Bob Feller using a state of the art (for its times) home movie camera at Cincinnati during the 1940 World Series. 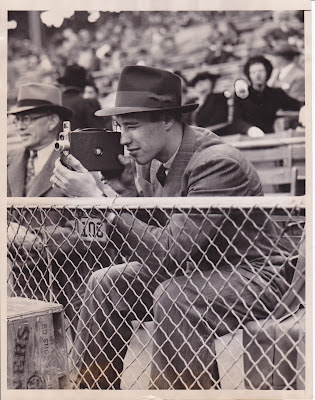 BOB FELLER TAKES A BUSMANS HOLIDAY.
One of the interested spectators at today's game between the Tigers and Reds was Bobby Feller brilliant pitcher of the Cleveland Indians. Bobby is shown making movies of the activities at Crosley Field at the sixth game of the series.

The second photo also shows a player shooting home movies during a World Series.did not play in the '57 Series. The former Bonus Baby had spent the 1955-56 seasons in the military, and played only seven games with Milwaukee in 1957.


Home movies of Red Schoendienst, left, and Joe Adcock are made today my Mel Roach, utility infielder, before practicing on home field, where Braves tomorrow resume World Series against New York Yanks. Red and Joe are regulars, of course. 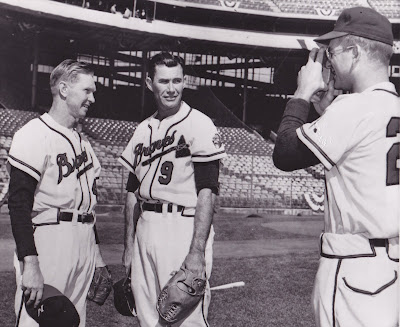