Ballplayers get the best babes, Part 3

I presented a trio of similar photos almost exactly a year ago, in my blog of 9/9/11, and another grouping on Sept. 10 of this year. 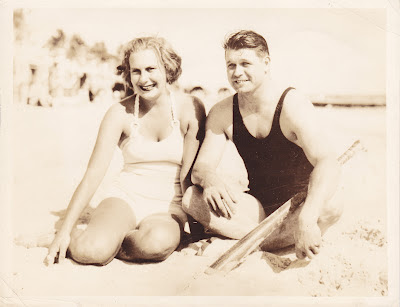 The first is a picture of a pair of future Hall of Famers. I believe it's a 1934 photo from International News Photo service.

You probably recognize Jimmie Foxx; he's posed on a beach with Helene Madison, who had won three gold medals at the 1932 Olympic Summer Games in Los Angeles.

Madison appeared in the multi-sport bubblegum card Sport Kings set in 1933 and was later inducted into the U.S. Olympic Hall of Fame.

JIMMY MEETS A REAL MERMAID
Maimi Beach, Florida . . . Helene Madison, the Seattle miss who took amateur swimming records on high, a season or so back, is the mermaid that Jimmy Foxx met up with here. Somebody must have told him that mermaids are vicious, or something, for Jimmy brought along his bat, just in case. Of course we don't have to tell you that the Jimmy person is just about the only star that Connie Mack has left to play on his baseball team this coming season. 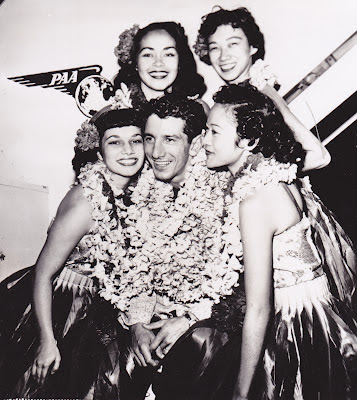 In the second photo Billy Martin is shown arriving in Hawaii for the Yankees post-season tour of the Orient on Oct. 12, 1955.

The caption on the AP Wirephoto reads . . .

HAPPY HULA WELCOME
Yankee infielder Billy Martin is engulfed by colorful Hawaiian leis and a bevy of Hula maidens as the New York Yankees arrive recently at Honolulu on the first leg of a Far Eastern tour. They will play exhibition games in Hawaii, Japan, Okinawa and the Philippines.

That's the logo of the old Pan-American Airways on the plane in back.


Our third photo is undated and unattributed. It pictures a sartorially splendid and youthful Stan Musial and, presumably, his wife.

The photo looks to have captured the couple as they deplaned from a flight. 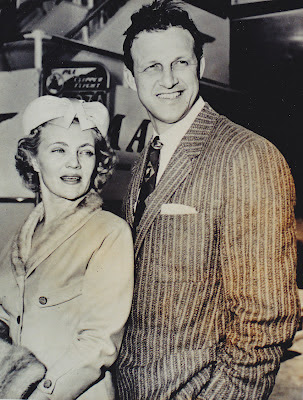