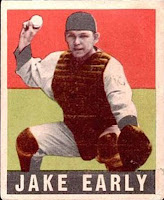 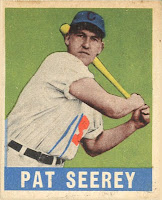 
There’s probably a rule against it now, but in a game on July 26, 1946, Cleveland Indians outfielder Pat Seerey was having a bad day . . . and it got worse.


Seerey had already struck out twice against Washington Senators pitcher Mickey Haefner and the home crowd at Municipal Stadium was booing him when he came up late in the game. But Seerey made contact and sent a dribbler down the third-base line.


Seerey stopped in his tracks and headed back to home plate. The Senators third baseman threw the ball to first.


As Seerey took his stance anew at the plate, home plate umpire Cal Hubbard said, “I’m sorry, but you’re out.”


“You called that a foul ball,” Seerey protested. “I didn’t say a thing,” said the ump, “That was Jake Early.”