Uncommon commons: In more than 30 years in sportscards publishing I have thrown hundreds of notes into files about the players – usually non-star players – who made up the majority of the baseball and football cards I collected as a kid. Today, I keep adding to those files as I peruse microfilms of The Sporting News from the 1880s through the 1960s. I found these tidbits brought some life to the player pictures on those cards. I figure that if I enjoyed them, you might too.
In the June 29, 1944, issue of The Sporting News, noted baseball historian Frederick G. Lieb penned a feature about Boston Braves infielder William "Whitey" Wietelmann. 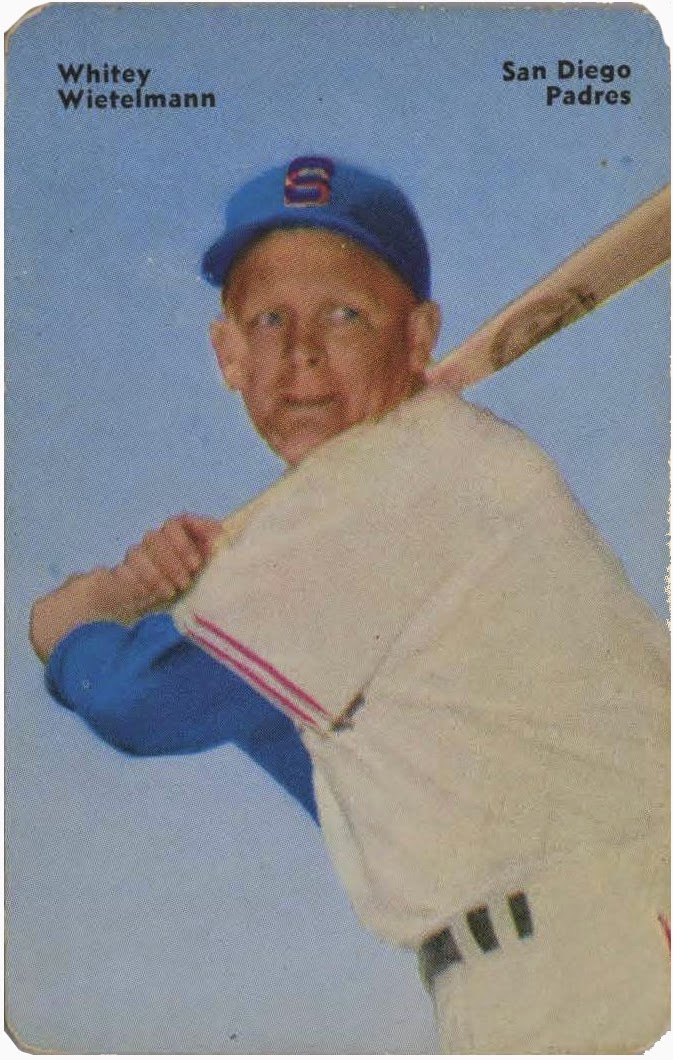 He led with, “In times like these, when our brave and uncomplaining kids are losing eyes, limbs and their lives on war fronts all over the world, the pluck of a young player with impaired vision and subject to repeated eye operations, still standing up there undaunted at the plate, doesn’t mean so much, but our nomination for the gamest player of the year goes to the young shortstop of the Boston Braves, Billy Wietelmann.”

The player, Lieb went on to explain, had undergone four operations since spring training to remove cysts from his right eye. The condition had cropped up as the Braves were going through their preseason paces at Wallingford, Conn.

“As the condition comes on,” Wietelmann was quoted, “my vision in the right eye seems to become affected. A certain dimness comes up in front of the eye.”

One of the Braves minority stockholders, Dr. William Wranger, who had a private hospital near the team’s spring camp, removed cysts from Wietelmann’s eye on March 21, and the young shortstop thought that was the end of it.

Unfortunately, others began to appear and Dr. Wranger operated again on April 3. A third operation was necessary on April 23, after the season opened, and Wietelmann played that same afternoon against the Phillies. The next operation came on May 13 in Pittsburgh, forcing him to miss that day’s game.

“It seems to be a germ in my system,” Wietelmann told Lieb, “and the doctors are trying to eradicate it, but it has been darned annoying and I try not to be discouraged.”

The recurring blurring in his right eye forced Wietelmann to give up switch-hitting and stick to right-handed batting. In the field, the condition caused him to sometimes overrun a ground ball. To address that situation, Wietelmann was benched intermittently throughout June while he was fitted for a pair of shatterproof glasses that he then wore both on and off the field.

Wietelmann’s eye problems weren’t the first adversity he had faced in pursuing his baseball career.

In 1938 fire broke out at Wietelmann’s home in Zanesville, Ohio, where the 19-year-old player lived with his father, who had long been active as a player, owner and manager in amateur and professional baseball there. The elder Wietelmann had gone blind nearly a decade earlier.

Although the son escaped from the blaze, he realized his father was trapped inside. He tore loose from firemen and ran back into the blaze, effecting a rescue. “Dad was in that burning house; he was blind and I simply had to get him out,” he said. “My hair and eyebrows were burned off, and I was badly burned on the face and hands. Fortunately, just around that time the medical profession discovered a remarkable remedy for burns. I was covered with it, and though I was hospitalized for some time as the result of the burns, the treatment was so effective that I do not have scars today.”

Though his high school did not have a baseball team, Wietelmann attracted attention from the pros as a remarkable fielder in American Legion and semi-pro ball around Zanesville. The Boston Bees signed him to a professional contract in 1937 at the age of 18.

He played Class D ball that year at Beaver Falls, moved up to Class B in 1938 at Evansville, and Class A with Hartford in 1939.

In September 1939, Wietelmann was called up to Boston. He spent the entire 1940 campaign with the Bees, but hit only .195 with no power.

In 1941-42, he split time between the big club and its top minor league teams. With World War II depleting manpower, Wietelmann spent all of the 1943-46 seasons with Boston. After the 1946 season he was traded to Pittsburgh, ending his big-league days with the Pirates in 1947.

Over nine seasons in the National League, Wietelmann averaged 64 games a year, hitting .232 with a total of seven
home runs. 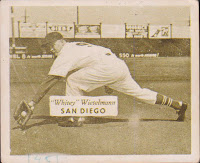 In 1953, Wietelmann began working as a playing-manager in the lower-level minor leagues. He led Milwaukee's Class B team at Wichita Falls in 1953, and the Braves' Class A club at Lincoln in 1954.

In 1955-56 he managed Yuma in the Class C Arizona-Mexico League.

During his player-manager days, Wietelmann took up pitching. In 1955 with Yuma he had a 21-13 record for the Sun Sox.

He retired as a player and manager after the 1956 season, but remained in the game as a coach at both the minor league and major league levels for the Padres and Reds. In 1984 he threw out the ceremonial first pitch for San Diego's first-ever home playoff game. He remained with the Padres organization through the early 1990s and died in 2002.

Whitey Wietelmann's baseball card legacy is thin. His only career-contemporary card as a player was in the 1952 Mother's Cookies PCL set. In 1973 he appears as one of the coaches on Topps' San Diego Padres manager card of Don Zimmer. In 1975 he is pictured as a Padres coach on the SSPC set.