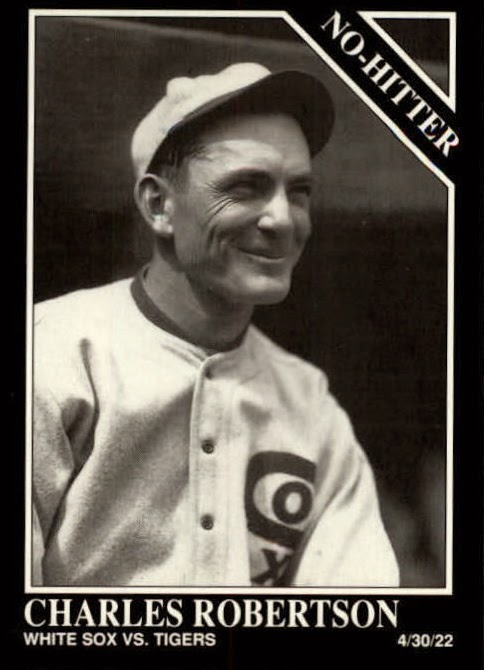 If his teammate is to be believed, the team-signed baseball that White Sox pitcher Charley Robertson prized as a souvenir of his 1922 perfect game wasn’t actually used in that game.

No Hits—One Error
After 19 years, Johnny Mostil, former brilliant defensive White Sox outfielder, has disclosed that the autographed ball which Charley Robertson has as a souvenir of the last perfect game pitched in the majors, in Detroit, April 30, 1922, is not the ball which was in play. Johnny let the cat out of the bag in telling of his biggest thrill in baseball, his catch on the former Detroit catcher, Johnny Bassler, which ended the game. Basler his a low, screeching liner to left field, a few inches in fair territory, which Mostil snagged with a diving catch. Before he could regain his footing, an excited fan snatched the ball out of his hand.
Back in the dugout, Kid Gleason, the White Sox manager, asked Johnny: “Where’s the ball?” Mostil told what had happened. “Quick, grab a ball, any ball,” said Gleason. So, Mostil picked up a practice ball, which he took to the clubhouse, where the players, club officials and admirers were already making a big fuss over Robertson. Mostil proudly handed the pitcher the ball, which all of the players autographed and which still is in Robertson’s possession.