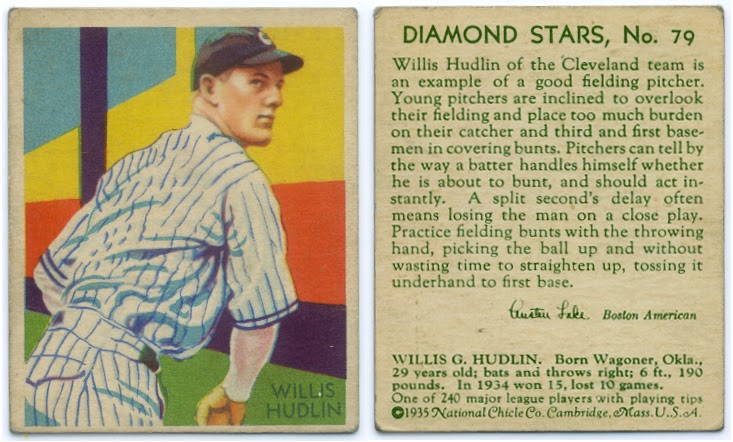 When the St. Louis Browns were in the thick of the American League pennant race in 1944 they called on former major league pitcher Willis Hudlin. At age 38, Hudlin  had last pitched in the major leagues four years earlier, compiling a 2-5 record for the Indians, Senators, Giants and Browns in 1940.

After leading the league most of the season, St. Louis dropped into second place on Labor Day. When Bob Moncrief was shelved with arm trouble after five straight losses on Aug. 27, the call went out for Hudlin.

Hudlin, at the time, was part owner of the Little Rock Travelers in the Southern Association and the ace of its pitching staff, with a 12-3 record and 2.56 ERA. He was playing in his fourth season for Little Rock.

Hudlin sold himself to the Browns. Despite appearing in only one game for St. Louis, taking the loss Aug. 31 in a two-inning relief role, he picked up a check from the loser’s cut of the 1944 World Series, being voted a one-quarter share of $685.95. Then he sold himself back to the Travelers.

The pitcher had been released from the Army Air Corps in May, having reached his 38th birthday. He had been stationed at Little Rock, where for the past two years he had been tutoring the army’s flight instructors and pitching part-time for Little Rock.

Hudlin was unique among ballplayers in that era in that he disdained rail travel around the Dixie circuit, instead piloting himself from series to series in a two-seater monoplane.He flew a Culver Cadet, which a reporter described as a “speedy, economical lightweight, which he can park in a pea patch.”

Thus while his teammates wearied through 13-hour day coach rail trips from New Orleans, Hudlin was winging home in three hours. “I spent every night in a hotel or at home,” he said.

Despite his choice of transportation, Hudlin expressed doubts that the major leagues would be switching to air travel any time soon. “Team travel in a huge plane is too risky,” he was quoted “When one of those big babies falls, it’s—whoof! Maybe it won’t happen in a hundred years, but the loss of an entire team would mean millions of dollars in players alone and might disrupt a league.”

Following the 1944 World Series, Hudlin returned to Little Rock where he resumed his job as a flight instructor at a municipal airport.

In the spring of 1945 he resumed his pro ball career. Hudlin had played only one year in the minors, with Class A Waco in 1926. He had a 16-11 record in the Texas League he was acquired by the Cleveland Indians in mid-August of '26.

Hudlin spent the next 13 full seasons at Cleveland, earning a 155-150 record before beginning his four-team tour in 1940. On Aug. 11 at Cleveland, he gave up Babe Ruth 500th home run; despite also being homered off of by Lou Gehrig, Hudlin won the game 5-4.

After his one-game comeback in 1944, Hudlin pitched for two more years at Little Rock, then ended his pro career at Jackson in the Southeastern League in 1947-48. His minor league lifetime total were 71-49 with an ERA of 3.52, all pitched at Class B or higher levels.

In the 1950s he served as a pitching coach for the Detroit Tigers and later scouted for the Yankees. He died in 2002 at the age of 96.

As a star pitcher throughout the bubblegum card era of the 1930s, Hudlin was included in many of the major sets from Diamond Stars, Goudey, Batter-Up and National Chicle.
Posted by Bob Lemke at 1:54 PM