Notes on my card creation process may help others 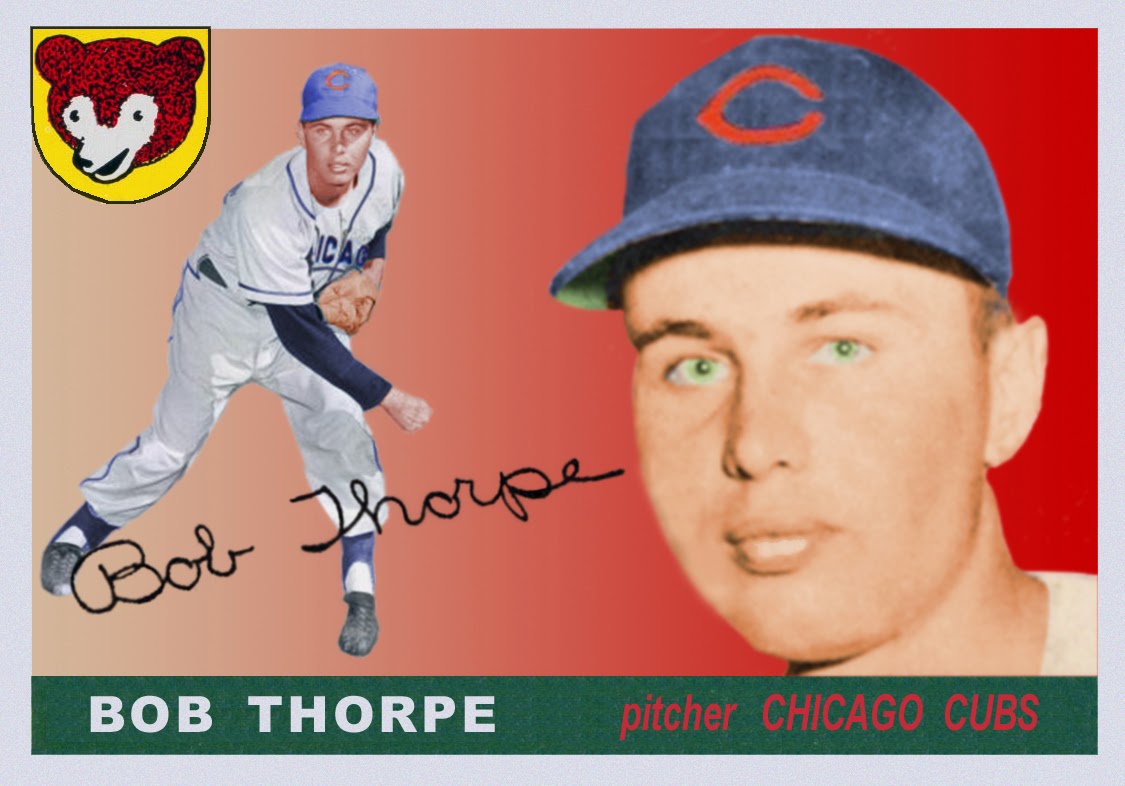 The other day on this blog I debuted my pair of Bob Thorpe custom cards, in the formats of 1955 and 1958 Topps.

Today I want to share another little bit of my process for custom card creation. Perhaps other card creators will find something useful they can apply to their own efforts.

As you can imagine with a player who had only two games in the major leagues and just six seasons in pro ball, there are not a lot of photos of Bob Thorpe with which to work. And, for this player, one has to be careful not to select a photo of the "other" Bob Thorpe, who played for the Boston/Milwaukee Braves 1951-53.

For the '55-style card I needed both portrait and action photos.

After considerable searching I found only two portrait photos of Thorpe in a Cubs uniform. I worked with each of them for a day or two and never really got where I wanted to be.

I decided to work with the portrait of Thorpe that appeared on the rare regional 1955 Old Homestead hot dogs team set of Des Moines Bruins cards. 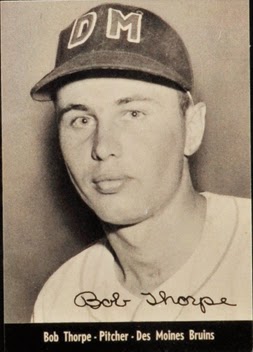 The picture was black-and-white, so I had to colorize it for my card and replace the letters on the cap. Frankly, I don't feel that I was completely successful with that process. The card picture did not have great contrast. Still, with my Photoshop Elements program shouldering the heavy lifting, I was able to come up with something I can live with. In the unlikely event I would ever find a better portrait, this card would be a candidate for rehabilitation on that basis.


I am much more pleased with the result on the action photo on this card.

The original photo was a pitching pose, black-and-white of course, of Thorpe with the Stockton Ports. The image was probably made in 1954 when Thorpe was lighting up the California League. It appears to be a local press photo. 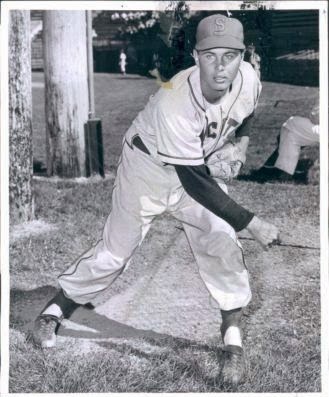 To convert that 60-year-old picture to my fantasy card use, I began by dropping out the background with Elements' eraser tools, and colorizing the resulting cutout image. 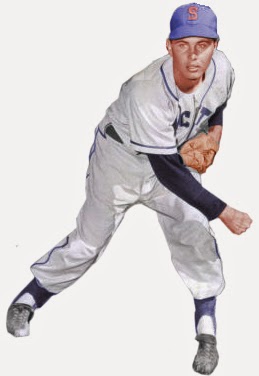 The resulting picture admirably fits my standard for a 1955 Topps-format custom. I thought long and hard about using the image as is.

However, doing so would have been taking liberties with the original 1955 Topps format. While I didn't check every card in the set, I believe that Topps didn't use any minor league photos. Or, rather, they did use some minor league photos, but airbrushed away any uniform details that would identify the picture as other than major league. A perfect example is the card of Orioles catcher Hal Smith, which pictures him wearing a white jersey devoid of logos.

In a similar vein, the rookie card of Sandy Koufax shows him in a generic white uniform. Koufax came right to the majors from the University of Cincinnati, so it wasn't minor league details that Topps painted out. Some years ago, I heard an interesting bit of hobby lore that alleges the picture of Koufax with his foot on the dugout step and cap in hand originally showed him wearing a Pittsburgh Pirates uniform. That photo, it was said, was taken when Koufax had a tryout with the Bucs prior to signing with the Dodgers. If that's true, I'm surprised I've never seen the original picture.

Be that as it may, I ultimately decided that as nice as the Thorpe-Stockton action picture had turned out, I would have to change the "S" on the cap to a "C" and white out the letters of "STOCKTON" from the jersey.

The logo-switch on the cap was easily accomplished. I searched pictures of other 1955 Topps Cubs cards until I found an action photo of a player facing directly front. That turned out to be El Tappe. I picked the "C" off Tappe's cap and grafted it onto Thorpe's. 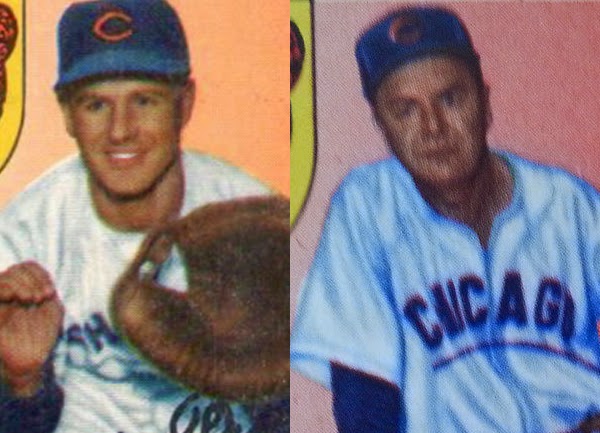 In the process of poring over '55T  Cubs cards, I noticed that the small photo of Cubs manager Stan Hack provided a good luck at the "CHICAGO" logo on his jersey. I guessed, correctly as it turned out, that with a little finagling I could replace some of the "STOCKTON" logo with the Cubs lettering. 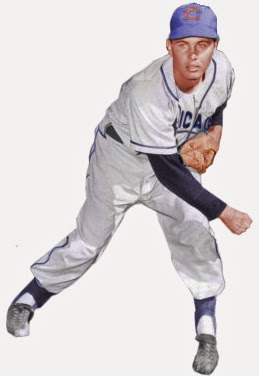 I think it turned out admirably.

One other element found on 1955 Topps cards could have sunk my project before it ever got off the ground . . . the facsimile autograph.

As scarce as Bob Thorpe photos are, images of his signature are even harder to find. Again, you have to be careful to get the right Bob Thorpe (Robert Joseph Thorpe) signature. There are plenty of images of Benjamin Robert Thorpe's autograph on the internet, including on his 1952 Topps high-number card.

After a bit of searching, I discovered that Thorpe had been included in the first edition of the 1955 Chicago Cubs yearbook, with a nice bold facsimile signature under his picture.

I put out an SOS to the members of the Network 54 vintage baseball memorabilia forum and received a rapid response from Georgia collector Tom Hufford, who sent a scan of the yearbook page. Hufford not only has a 1955 Cubs yearbook, but his book is almost completely hand-signed by members of that team. As he noted, the penned signature of Thorpe matches his facsimile autograph stroke for stroke. 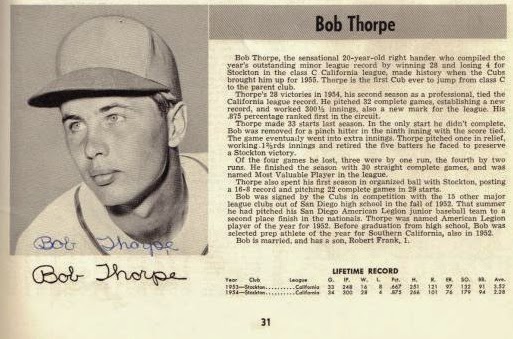 So, there you have my "notes" on the creation of my 1955-style Bob Thorpe card.From time to time in the future, if I think similar presentations would be useful to card creators, I'll try to share similar details.