It's been a while since I've done a "Standard Catalog Update" page for the blog . . . mostly because I've been retired from the catalog for several years.

That, however, hasn't changed my conviction that the hobby benefits when heretofore "uncataloged" baseball cards and player memorabilia are presented for the record.

A recent correspondence with a very dedicated Baltimore Orioles collector, Alan Strout of Maine, allows me to share in this space some updates to existing O's regionals checklists and some issues that have not yet been recorded for hobby posterity.

When I was editing the "Big Book" I always found it gratifying when specialist collectors like Alan were willing to make the effort to share their finds, rather than selfishly hoarding the information.

to kick off this short series, I'm going to present additions to checklists that have been included in the Standard Catalog of Vintage Baseball Cards and which were subsequently expanded upon on this blog. 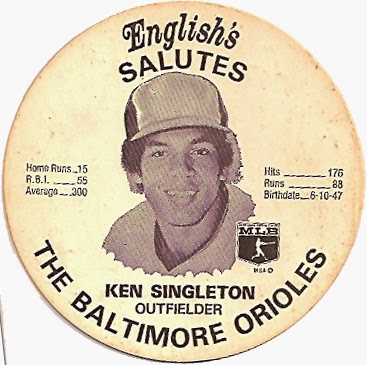 In its heyday 30-40 years ago, English's Family Restaurants dotted the Eastern Shore of Maryland with their iconic chrome railroad car-style diners. The chain's claim to fame was fried chicken that devotees swore was the finest to be had anywhere.

They're all gone now, and if I'm reading the internet correctly, English's famous fried chicken is now available in just one location, in Salisbury, Md., at a restaurant called Bay Country Meals.

Like that other famous chicken chain, English's offered its bird by the bucket. In 1976, the lids to those buckets featured black-and-white portrait photos of popular Baltimore Orioles players.

As with other cards and collectibles from Mike Schechter Associates in the 1970s and 1980s, the player photos were licensed by the MLB Players' Association, but not Major League Baseball, so team logos were airbrushed off the caps.

Two sizes of bucket lids were made, in 8-1/2" and 7" diameter. They are printed on heavy waxed cardboard stock and are typically found with minor nicks and dings around the edge, and maybe even a  bit of grease from contact with the chicken.

According to Strout, the large-format set is compete at three: Mike Cuellar, Ken Holtzman and Jim Palmer.

English's, by the way, followed up its 1976 bucket-lid set with a 13-piece issue in 1983 honoring the World's Champion Orioles.

Check in tomorrow for an updated checklist of the 1959 Kiwanis Club of Baltimore Baseball Clinic card set.

If you wish to contact Strout about the Orioles regionals you'll see in this series or exchange information about other O's issues, you can email him. I'm going to give his email address here in "coded" form so the robo-scanners don't add it to their spam lists. You can reach Alan Strout of Maine at (his first name)_(his last name)(at symbol)umit.(his state).edu Strout can also be reached by mail at P.O. Box 84, Kenduskeag, ME 04450.

One of Strout's very ambitious collecting goals is to acquire a program from every Orioles minor league team for each year they were in the Baltimore organization.