We continue our series on 1950s-1970s Baltimore Orioles regional cards that have largely remained uncataloged to this point.

The data and scans for these presentations, which began Feb. 8 (English's Chicken bucket lids) and Feb. 9 (Kiwanis baseball clinic), are brought to you courtesy of specialist collector Alan Strout of Maine.

Among the many vintage Baltimore Orioles regionally issued baseball cards and player collectibles he has chased down over the years, Strout has assembled complete checklists of the "cards" printed each year 1960-1963 during spring training by the Baltimore News-Press.

The formats of these issues differed a bit from year to year, but generally share a number of elements such as a black-and-white portrait photo, biographical details, a capsule career summary (1960-61) or lifetime major and minor league stats (1962-63), a facsimile autograph and a dotted line or margin rules indicating how the pictures were to be cut out of the newspaper.

Values for there newspaper cards is hard to pin down. They are usually of interest only to die-hard team specialists and single-player collectors. They tend to have suffered border damage when kids cut them off the page, and most have yellowed, curled or otherwise deteriorated over the years. While they probably are more typically found for a couple of bucks apiece, some have reportedly sold for more than $100.

If you would like to contact Strout about the Orioles' regionals you'll see in this series or exchange information about other O's issues, you can email him. I'm going to give his email address here in "coded" form so the robo-scanners don't add it to their spam lists. You can reach Alan Strout of Maine at: (his first name)_(his last name)(at symbol)umit.(his state).edu. Strout can also be reached by mail at P.O. Box 84, Kenduskeag, ME 04450. 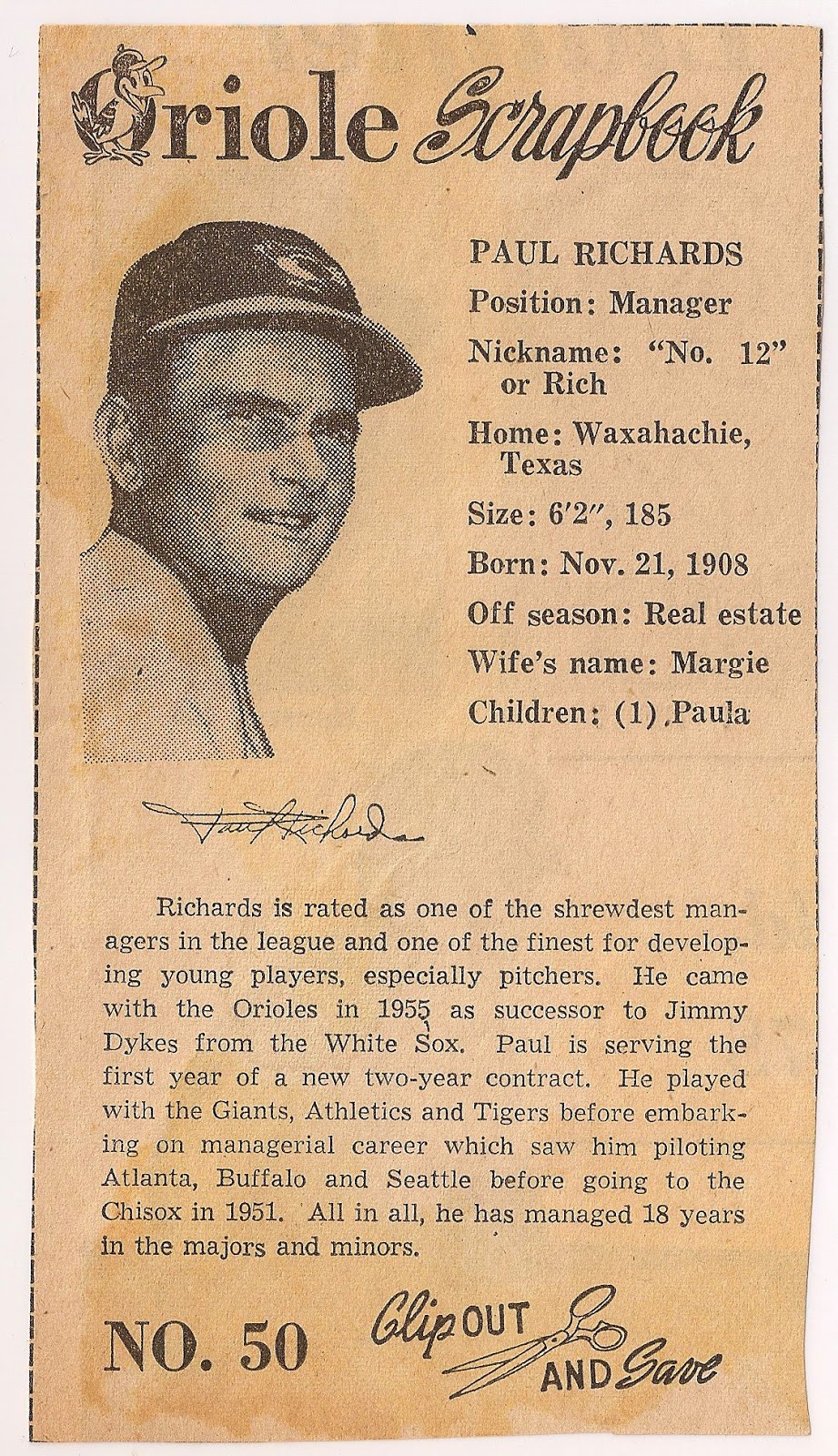 1960 Baltimore News-Post Scrapbook cards
The premiere year for the Orioles' scrapbook cards was the only year that the pictures were numbered.

The format for the 1960 pictures was a nominal 4" x 7". Besides the picture and facsimile autograph, the card had personal data including name, position, nickname, home, height, weight, birth date, off-season occupation and name of wife and children, when applicable.

Of special note is the card of 19-year-old Dean Chance. After two years in the Orioles' minor league system, he was picked by the Washington Senators in the 1960 expansion draft and immediately traded to the Los Angeles Angels, for whom he won 20 games and the Cy Young Award in 1964. (It would be fun to make a 1960-style Rookie Star card of Chance as an Oriole, but I have never found a photo of him in a Baltimore uniform.)