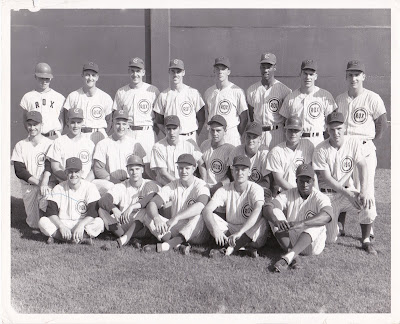 Yesterday, as I came to the bottom of a box of cards and collectibles that I'd accumulated over my 25+ (1980-2006) years as writer, editor and publisher of some of the hobby's leading periodicals and books, I re-discovered a great minor league team photo that I'd bought years ago.

As I wrote in describing the picture for an eBay listing, "This is an authentic, original black-and-white glossy team photo of the 1961 St. Cloud (Minn.) Rox, Class C farm club of the Chicago Cubs in the Northern League. This was Lou Brock's first year in Organized Baseball and his only season in the minor leagues. He is pictured sitting in the front row (far right)." 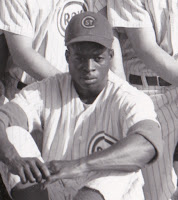 The Cubs had signed Brock as a free agent out of Southern University in Baton Rouge in late summer 1960, more on the basis of raw talent than proven accomplishments.

At the end of the season, Brock was called up to the Cubs, ending his minor league days and starting a Hall of Fame career.

The '61 Rox were managed by career minor-leaguer Joe Macko, who also played first base and pitched a little.

The photo measures 10" x 8-1/8". The back is blank, and has a player identification key taped on. It was part of a large number of 1940s-1970s minor league team pix I collected over the years and recently sold on eBay as part of a decade-long divestment of my accumulations. Going through the various boxes and binders of my "stuff" has been a lot of fun, especially when I find nearly-forgotten pieces like this Rox photo.

The picture was put up for auction on eBay, closing March 6. It sold for $76.