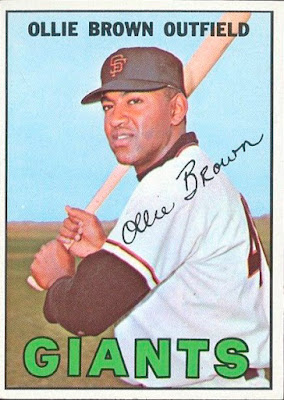 Somebody in the San Francisco Giants' organization in 1963 came up with the idea of switching young Ollie Brown from the outfield to the mound.

In a one-season experiment during his second season of pro ball, 19-year-old Brown made 21 starts for the Decatur Commodores in the Class A Midwest League. And one of those starts gave Topps cartoonists something to feature on the backs of several of his early baseball cards.

On Aug. 13, 1963, "Downtown" Ollie Brown pitched a no-hitter against the Wisconsin Rapids Senators. And this wasn't one of those cheap minor league seven-inning doubleheader games. It was a genuine nine-inning gem, an 8-0 shutout in which only five balls reached the outfield.

Which is not to say that it was a breeze for Brown; he walked 11 batters. However, he also helped himself with the bat, belting two home runs and plating four RBIs.

The 1963 season was Brown's second year at Decatur. He'd signed with the Giants in 1962 as an amateur free agent. After a handful of games with Salem in the short-season Class D Appy League, he'd gone to Decatur in the Midwest League, also at the time in a Class D circuit. He was able to demonstrate some power, with 10 home runs in 64 games. 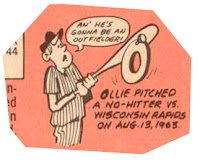 But batting just .230 and striking out about once per game got somebody in the 'Frisco front office thinking his true calling might be somewhere other than the outfield.

Back in Decatur for 1963, the league having "improved" to the Class A level, Brown was given a regular spot in the rotation, playing in the outfield about once a week and doing some pinch-hitting. The move was not a disaster, Brown had a 9-8 record including eight complete games with three shutouts. But his ERA was 4.76, and in his 123 innings pitched he had given up 132 walks while striking out 107. His 24 wild pitches were the most in the MWL that season and he'd hit seven batters.

Brown had improved at the plate in 1963, at least statistically. He cut his strikeouts by nearly two-thirds, fanning just 22 ties in 92 at-bats. He'd also hit six home runs.

With the pitching experiment inconclusive, Brown was sent to the Giants' winter instructional league team in Arizona after the '63 season. Back in the outfield, he led the team (those who played in more than a dozen games) with a .325 batting mark.

The extra work in the off-season paid big dividends for Brown. He was still at Class A in 1964 but this time it was with Fresno in the California League, back where he'd grown up.

That kind of domination in a fast A league earned Brown a jump to the top rung of the Giants' minor league ladder for 1965. With Tacoma in the Class AAA Pacific Coast League, Brown batted .293, leading the team with 27 home runs.

That earned him a September call-up to the big leagues. Though he hit just .200 with no power in his first major league look-see, Brown was there in San Francisco when the 1966 season opened. With a brief step back to AAA Phoenix in July, where he hit .343 with nine homers in 27 games, Ollie Brown was on his way to a 13-year major league career.

Left unprotected in the 1968 expansion draft after a down year in which he'd spent a couple of months back with Phoenix, Brown was the San Diego Padres' first pick. He hit 20 home runs in 1969 and 23 in 1970 before losing his power stroke. Brown was traded to the Oakland A's in mid-May 1972, then picked up on waivers by the Brewers at the end of June.

After hitting .280 for Milwaukee as a part-time outfielder and designated hitter in 1973, Brown was traded to the California Angels in a nine-player deal. He was purchased by the Astros in spring training 1974, but after hitting just .217 near the end of June, he was waived to the Phillies.

Brown closed out his pro career with three more seasons in Philadelphia, retiring after the 1977 season. He holds a lifetime BA of .265 with 102 career home runs. He died a year ago, in April, 2015 at age 71.

Something else a collector could learn from the backs of Ollie Brown's baseball cards: he came from an athletic family. His little brother Oscar played parts of five years (1969-73) for the Atlanta Braves and older brother Willie (not the Hall of Fame Willie Brown) had three years in the NFL with the Rams (1964-65) and Eagles (1966).