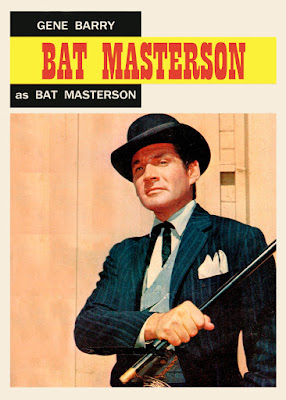 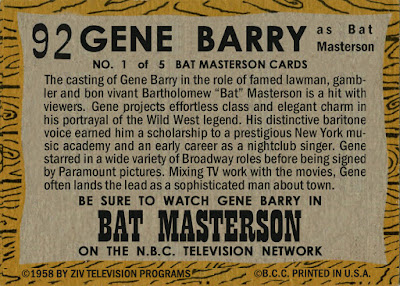 We were hit with nearly two feet of snow here is west central Pennsylvania the weekend of Jan. 22-23. With nowhere to go and no way to get there, the situation offered a great opportunity to work on some custom cards.

It's been nearly a year since I made any additions to my TV Westerns series, so that was my subject of choice.

The series Bat Masterson lasted on NBC for four seasons (108 episodes) 1958-1961 during the heyday of TV Westerns.

Suave Gene Barry had the title role. To my mind, his portrayal of Masterson was just the first of three personifications of the same  debonair man-about-town character. There's really not a lot of difference between Bat Masterson, Amos Burke (Burke's Law 1963-1966) and Glenn Howard (The Name of the Game 1968-1971) as played by Gene Barry.

When the Starz premium cable network has its free preview weekends, I like to watch or record reruns of Bat Masterson. For several years It has been part of the lineup on the network's Encore Westerns channel.

The show's original format made it something of a challenge to add to my TV Westerns card series. The half-hour program was broadcast in black-and-white, making available color pictures for my cards somewhat scarce.

Making the best of the situation, I was able to create this pair of custom cards in recognition of one of my favorite TV Western shows when I was a kid. 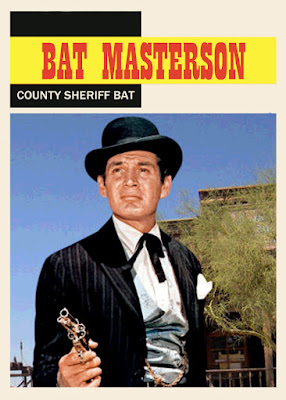 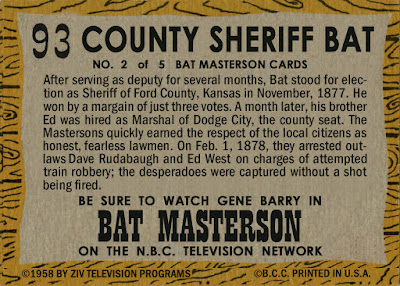