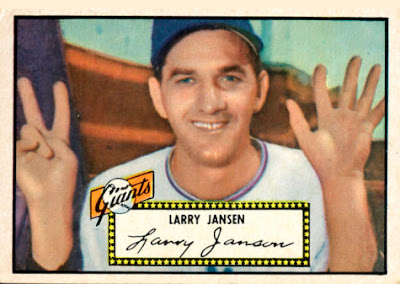 It is one of the horizontal cards in the set, and pictures a broadly smiling Jansen holding up five fingers on his left hand and two on his right.

Reading the back of the card, it seems Jansen is indicating the number of children he has. That homey touch and the horizontal format have given the card a modest boost in demand over the years.

But those seven children weren't the end of Jansen's brood. On Sept. 12, 1963, Jansen's wife Eileen gave birth to their 10th child, James Michael, whose appearance brought the family into balance at five girls and five boys.

The Sporting News noted that the newest Jansen was an "instant uncle" to four of Jansen's older grandchildren.

His procreative prowess aside, Larry Jansen enjoyed a modicum of success as a professional pitcher.

In 1946, his fifth season in the minor leagues, Jansen won 30 games to lead the Pacific Coast League (they played 183 games in the league back then). His 1.56 ERA was also tops.

Naturally the N.Y. Giants brought Jansen up for the 1947 season. He was 21-5 with a 3.16 ERA. His .808 winning percentage led the major leagues and he came in second in Rookie of the Year voting to Jackie Robinson.

In his eight years with the Giants, Jansen was a two-time All-Star, including 1951 when he tied for the major league lead in wins with teammate Sal Maglie at 23. Some of the luster of that season was lost when he was tagged for two World Series losses to the Yankees.

After winning his first two decisions in 1954, he dropped a pair and the Giants' released him at the All-Star break.

Jansen returned to the Coast League for 1955 and had a 7-7 record with Seattle. In 1956, again with Seattle, he had an 11-2 record when the Cincinnati Reds brought him up in August. For the remainder of the season he was 2-3 with Cincinnati.

Jansen  pitched four more years in the PCL, retiring after the 1960 season to join the S.F. Giants as pitching coach in 1961. He held that post throughout the decade.

At the time of his death in 2009 in his home town of Verboort, Ore., Jansen had 23 grandchildren, more than 40 great-grandchildren and a great-great grandson. 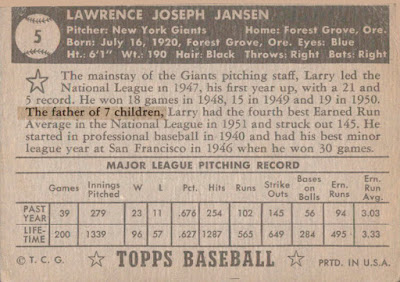