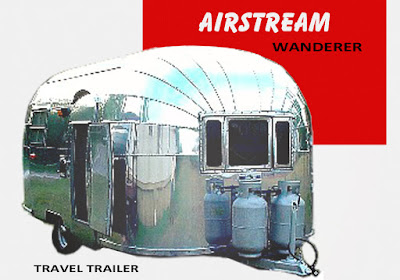 My latest custom non-sports card in the 1954-55 Topps World on Wheels genre pairs my passion for that card set with my fascination with Airstream travel trailers, particularly the mid-century models.

I'm a Fifties guy, so these mirror-finish aluminum trailers really strike a chord with me.

I actually owned an Airstream for about a year a decade or so ago. If I recall the specs correctly, it was a 27' 1967 International Land Yacht.

It was purchased on eBay for $1,500. My wife and I planned to plant it in the yard of our place in Wisconsin and use it for a home office, guest bedroom, etc.

We had grand plans to restore it to its original glory, but like about 95% of those who buy Airstreams with such intentions, it didn't get done.

We did have a friend rewire the 120-volt electrical system so the air conditioning could be used, and my wife reupholstered the front couch and made new curtains in a retro parakeet fabric.

She used the trailer that summer as a place to have an early morning cup of coffee while watching her horses in the adjacent field. I used it as a place to spread out and sort the nearly one million sports cards I bought from Krause Publications when I left their employ in 2006. It is a blessing to have space to work on your hobby activities without having to pack up and put away everything the next time the kitchen table is needed at mealtime.

We were overmatched, though, when it came to restoring the exterior finish. Like all Airstreams, the aluminum skin oxidized over time and our amateur attempts to bring back the gloss were unavailing.

I sold it after about a year for $2,500. My wife still reads the Airstream ads on various internet sites, but I doubt we'll ever again take the plunge. If we do, it will definitely not be a project trailer.

Creating this custom card reconnected me briefly, but enjoyably, with the world of vintage Airstream trailers. That satisfied the urge for the time being. 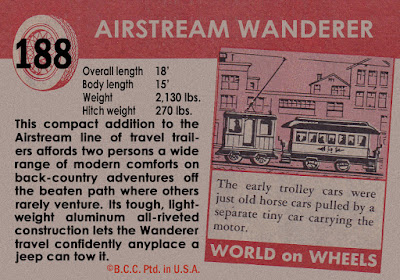