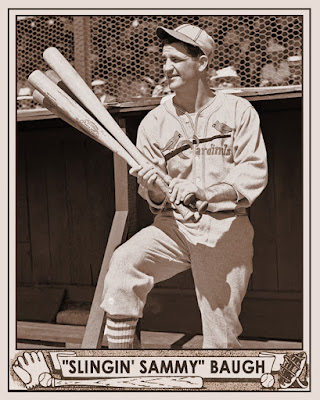 One of the greatest nicknames in NFL history was that of Slingin’ Sammy Baugh, the TCU All-American, Hall of Fame Washington Redskins quarterback and arguably the best all-around pro football player of the 20th Century.

Most fans and collectors, however, don’t know that the nickname was given to him by a Texas sportswriter in tribute to his ability to throw a baseball, rather than a football.

Baugh was All-Southwestern Conference third baseman at Texas Christian in 1936-37.

In the summer of 1937, between graduation and reporting to the Washington Redskins, Baugh took a job at a Pampa, Tex., lumberyard owned by the mayor and played semi-pro baseball for the Pampa Oilers.

The team went to the prestigious Denver Post Tournament where they met the best semi-pro teams in the country.

At the tournament, Baugh was scouted and signed by Ray Doan of the St. Louis Cardinals, to report to spring training in 1938.

As a rookie quarterback, Baugh’s Redskins defeated the Chicago Bears for the NFL Championship in 1937.

Following the title game, the Redskins and Bears embarked on a post-season barnstorming tour. In the last game of the exhibition tour, Baugh separated his throwing (right) shoulder, but was good to go when he reported to Cardinals’ manager Frankie Frisch at St. Petersburg for spring training in 1938.

He said that if he made good in the major leagues he’d give up football. While he was a terrific drawing card in the exhibition season, Baugh was farmed out to the Cardinals’ American Association team at Columbus when the season started. Early on in spring training he was being projected as the St. Louis Cardinals opening day third baseman, but as his baseball weaknesses began to show, the team decided to convert him to a shortstop and sent him down.

Writing in the Dec. 17, 1942, Sporting News, Merrell Whittlesey of the Washington Post, recalled, “His lack of experience, weak hitting and his bad shoulder left him too much of a risk for the Cardinals to carry him into the regular season.”

Columbus installed Baugh at shortstop. For the first two weeks of the season Baugh led the Red Bird hitters, then opposing pitchers began to curve him and throw change-ups. He lost his starting spot.

After a month with Columbus, Baugh was traded to Rochester of the International League in a five-player deal between the Cardinals’ AA clubs.  With the Red Wings, Baugh found himself playing backup to future MVP and perennial All-Star Marty Marion.

Whittlesey said of Baugh, “His fielding was fair and his arm was good in throws across the diamond.” Baugh hit only .183 with Rochester, bringing his season’s average down to .200, with little power (two doubles, a triple and a home run among his 26 hits).

In August he left the team to report to the Redskins.

Baugh was assigned to Sacramento of the Pacific Coast League for the 1939 season, but the Cardinals’ organization said he would not be allowed to leave Aug. 1 to join the Redskins, so he opted to end his professional baseball career.

The rest is football history.

It's not surprising that there are no career-contemporary baseball cards of Baugh. He played only a single season of pro ball and never got into an official major league game.

There are, however, a decent number of black-and-white 1938 spring training photos of Baugh in the uniform of the St. Louis Cardinals. One of those was so compelling that I recently decided to stretch my usual custom-card "rules" to create a 1940 Play Ball-style card of Baugh.

It would have been less of a stretch to work in the format of 1939 Play Ball, but that design is just so . . . plain.

I'm currently working on another Sammy Baugh baseball card. It, too, is a bit of an anachronism, but it provides a good excuse to expand my repertoire. Watch this space for future developments. 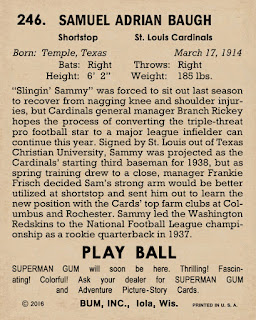