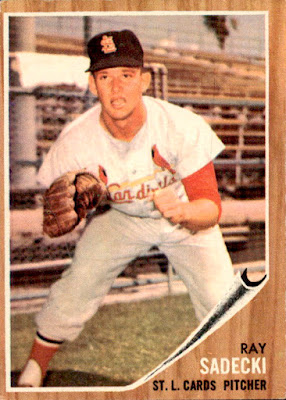 Written by St. Louis baseball beat writer Neal Russo, the lead was, “Ray Sadecki, bombed, blasted fined and suspended, all within 24 hours, returned to the good graces of the Cardinals, June 7, after a long conference with General Manager Bing Devine and Manager Johnny Keane.”

Russo continued, “Keane, usually a soft-spoken man ripped into Sadecki verbally and then plastered him with a $250 fine after the lefthander was raked for five quick runs in a relief role during the Cardinals’ come-from-behind 10 to 9 victory over the Reds, June 5."

The Cardinals' manager was quoted, "It was the poorest exhibition I’ve ever seen on a major league diamond. Everybody else has been going all out to win and he goofs off.

"We didn’t put him in there to take a beating," Keane continued. "We put him in there to win a ball game. We were losing only by 4 to 1 at the time. If Ray was pouting because he was put in as middle relief, he’ll have to learn differently. We’ve even done it with Bob Gibson."

Russo speculated that Sadecki “undoubtedly avoided a stiffer fine” because the Cardinals won the game.

Sadecki was already in Cardinals management’s doghouse because he had held out in spring training after winning 14 games in 1961.

Russo went on to detail Sadecki's travails in the June 7 game, “Bob Purkey, the Cincy pitcher who came into the game with three hits in 41 times at bat, belted Sadecki’s first pitch for a home run. Then Eddie Kasko singled to left. Marty Keough bunted to the left of the mound. Sadecki made a swipe at the ball and missed for an error.

“Next Don Zimmer hit a bouncer toward the mound. Sadecki fielded the ball and threw it into center field in attempting a force play at second. Kasko came home on the two-base error. Frank Robinson followed with a three-run homer and Keane trotted out to remove Sadecki before eventually leading him to the woodshed."

Sadecki lamented to the press, “I pitched lousy and I don’t mind being chewed out, but he (Keane) had no cause for slamming my effort. I never heard of a fine for pitching bad. How about Purkey? He blew an eight-run lead.”
“The 21-year-old lefthander, after brooding over the bawling out and the fine, announced the next morning that he wanted to be traded," Russo wrote. When he failed to report for the Cardinals’ game that night, he was suspended by Devine. The G.M. said he would not trade the southpaw.

Devine convened a meeting away from Busch Stadium between Sadecki and Keane on June 7. After what was termed a “long conference,” Devine announced, “Manager Keane and Ray Sadecki discussed their problems and resolved their differences. As a result, Sadecki’s suspension was lifted and he will be in uniform for tonight’s game.”

Sadecki had been incorrect stating Bob Purkey had blown an eight-run lead. He was up by only five in the bottom of the 9th, 4-9, when he gave up three more Cardinals runs. Reliever Ted Wills had given up the tying runs on three singles, a pair of wild pitches and a Ken Boyer home run.

The score remained knotted until the bottom of the 11th when Stan Musial hit a walk-off home run.

Purkey was doubly fortunate in the June 5 loss. He was not charged with the loss, thus preserving his '62 season record at 9-1 (he'd go on to win his next four starts). And he hit his first home run of the year off Sadecki. He'd been batting .073 going into the game.

Sadecki's come-to-Jesus meeting with Cardinals management seemed to have a positive effect on his pitching -- initially. In his next two games, June 9 and June 15, he had complete-games wins over the San Francisco Giants. Then, after losing in Philadelphia June 24, he shut out the Cubs at Wrigley on June 27.

July was not kind to Sadecki, though. He lost four of his five decisions, his only win for the month coming in relief. On July 31 he was sent down to Atlanta. At the time he had a 6-8 record and team-worst 5.56 ERA.

Manager Keane told Sadecki he was being sent to AAA because the staff was going from six to four starters and he didn't want Sadecki ;anguishing the bullpen.

"I didn't give up on this year," Sadecki told reporters, "but I guess the club gave up on me. Maybe I haven't pitched so well this year, but I haven't pitched much either." Asked whether his June blow-up was the reason for his demotion, Sadecki said, "I won't say that it did."

Sadecki won his first four decisions for the Atlanta Crackers, on the way to a 7-1 record and 2.55 ERA.