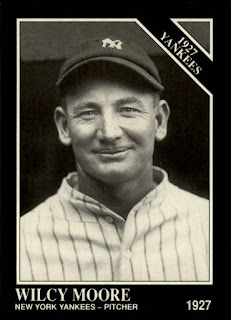 It is not infrequently that I read something in a back issue of The Sporting News that piques my curiosity and seems like it might be something you'd enjoy on my blog, but that doesn't agree with the "official" record. By and large I accept baseball-reference.com as being the "official" record . . . it is certainly the most comprehensive source I know of for baseball facts and figures.

Such a dichotomy presented today concerning Wilcy Moore, an important part of the World Champion 1927 N.Y. Yankees. Moore is considered the first in a long line of relief pitchers who contributed to the Yankees' winning ways over the past 90+ years.

His story was introduced to me in the Aug. 25, 1962, Sporting News "Over the Fence" column by Dan Daniel, long-time New York sports writer who is said to have published more words in The Sporting News than any other contributor.

Daniel was writing about great Yankees relievers and started his column with Wilcy Moore's story.

As Daniel told it, Moore had labored for many years in baseball's bushes before he had a big season with Greenville of the Class B South Atlantic League in 1926, winning 32 games.

However, because he was 33 years old, Greenville owner Dan Michaelove could get no interest from big league clubs in purchasing Moore. Daniel said Michaelove had to "beg" Yankees general manager Ed Barrow to buy Moore's contract for 1927 at $3,000 if Moore was still with the Yankees on Opening Day.

Daniel wrote of Moore, "He had hands as big as hams. His thumbs were twice the ordinary size. He was strong and he was hungry. He had been knocking around for many years. He had a good fast ball, very tricky and a deadly sinker."

Moore appeared in 50 games in 1927, for what Daniel characterized as "the greatest of all Yankee clubs." He had a 19-7 record including six complete-game starts. He led the major leagues with a 2.28 ERA.

"Moore never had seen much money," Daniel wrote, "He never got more than $2,500 for a season in the minors."

Moore decided to use his windfall to build a barn on his cotton farm near Hollis, Okla. During construction, Moore fell off the roof and injured his shoulder. "He failed off badly thereafter," Daniel concluded his account.

Moore spent the next two seasons with New York. He had a 10-8 record on an ERA in excess of 4.15. Following the 1929 season, he was traded to St. Paul in the American Association. With the Saints in 1930, Moore rebounded with a 22-9 record and was taken by the Boston Red Sox in the post-season Rule 5 draft.

In a season and a half with the BoSox, Moore was 15-23 but in 1931 led the AL for the third time in saves (8). On Aug. 1, the Yankees reacquired Moore from Boston in a trade. He went 2-0 for the remainder of the season and helped the Yankees to another World Championship by winning Game 4 of the sweep over the Chicago Cubs. Moore had come on in relief in the bottom of the 1st inning after the Cubs had taken a 4-1 lead.

Moore was 5-6 for the Yankees in 1933, his last year in the majors. He pitched seven more seasons in the high minors before retiring at the alleged age of 43.

I say "alleged" age because while the baseball-reference.com site gives that as Moore's age, Daniel, in his 1962 column, wrote that Moore had actually been born in 1894, not 1897. That's just one of the contradictions between Daniel's column and the "record." 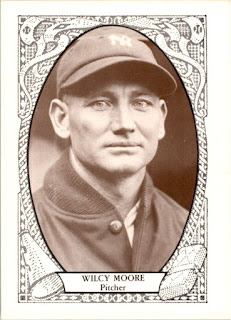 A baseball bio written by Fred Glueckstein for the Society for American Baseball Research points up other differences from Daniel's account. For instance, the SABR bio claims the Yankees pad $3,500 for his contract; Daniel said $3,000. Daniel said Moore was paid $5,000 salary for 1927, Glueckstein says the figure was $3,000.

My dilemma remains . . . which source should I rely upon in my blogging (and my custom card making)? Are contemporary accounts in TSN more accurate than latter-day compilations? Daniel penned his column only a few months after Wilcy Moore's death, and presumably knew him from his days covering the Yankees in the 1920s-1930s.

My general rule of thumb is to trust what is presented by baseball-reference.com though I will have to reserve the right to occasionally go with other sources.

Moore's baseball card legacy
Wilcy Moore's major league career spanned the years 1927-1933. As such, he preceded the days of the first great bubblegum card craze. While I suppose he may have been included in some of the more obscure regional card/memorabilia sets in his day, none come immediately to mind.

That all changed in the mid-1970s when collectors' issue baseball cards began to proliferate from such companies as TCMA. As a key member of the 1927 Yankees, Moore was included in many such sets; post-career cards of the first great Yankees' reliever -- such as those that ilustrate this entry -- are thus readily available.
Posted by Bob Lemke at 12:46 PM