Rookie turned his debut game around 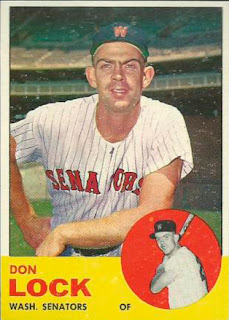 Today, let’s look at a rookie’s debut day that started off badly but turned around.

On July 11, 1962, the last-place Washington Senators traded Dale Long to the Yankees for outfielder Don Lock, then on the roster of Richmond in the International League. Lock had spent four and a half seasons in the Yankees' organization without ever making it to the big club.

He made his major league debut in the first game of a July 17 twi-night double-header against the White Sox in Chicago.

Through the first six innings, Lock’s debut was highly forgettable. He struck out in his first  two at-bats against Juan Pizarro in the second and fourth innings.

In the bottom of the sixth he called for a pop fly to short left field but the ball dropped in front of him for a fluke double by Joe Cunningham.

Lock then redeemed himself in the top of the seventh inning when his first hit in the major leagues was a home run that gave the Senators and Dave Stenhouse a 1-0 victory over Pizarro and the White Sox.