My 1955-style Mark Harmon gets a remake 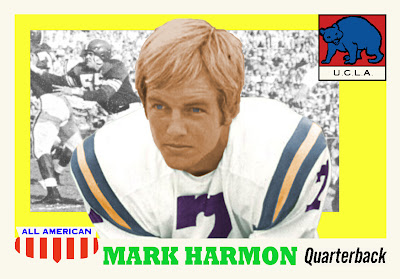 Not long after I created my first 1955 Topps All-American style custom card of Peyton Manning in 2003, I decided that my long-term goal would be to equal Topps' output and create an "Update" set of 100 cards.
My intention was to make cards in that classic format for players who either hadn't made the original Topps cut in 1955, or who weren't yet playing college ball then (in many cases, the players on my cards hadn't been born yet in 1955).
In the early days of my project I actually wondered whether or not I'd be able to find 100 suitable subjects. That fear soon dissipated as my to-do list grew and grew. Today I have completed 122 cards in the '55 AA style and have my sights set on many more. 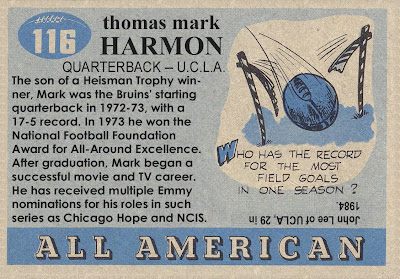 Actually, my "Second Series" is not yet complete. I'm holding card #152 for Randy Moss. I have some nice pictures of Moss in his Marshall playing days, but am holding off on doing the card until he retires.
This is all by way of explaining that some of my earlier efforts, in an attempt to fill out my checklist, weren't always of the highest quality. I was so concerned with getting to 100 cards that I sometimes worked with substandard photos. The result was, naturally, cards of which I'm not particularly proud.
One such was my first attempt at a Mark Harmon card. Harmon is, of course, best known to most for his years as the star of NCIS on CBS since 2003. But he was also UCLA's starting quarterback in the early 1970s. Harmon's father, Tom, appeared in the original 1955 Topps All-American set as Michigan's Heisman Trophy winning halfback of the late-1930s.
A look at my All-American Update checklist reveals several current and former TV and movie stars who played college football; it's a recurring theme of my collection. If I had not already made a Mark Harmon card, though, it would be quite far down my list of cards to create. I've ju 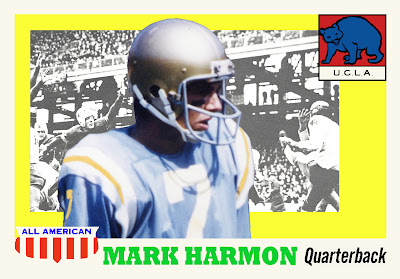 st never had a fan connnection with him and, in fact, have never watched more than a couple of minutes of any NCIS episode.
Nevertheless, since I did make a Mark Harmon card, and since it did turn out to be less than my best work. I've been on the lookout for a better photo with which the rework the card. At this point, I don't even remember where I got the photo that appears on my original version. It's blurry and you can't really tell who it is under that helmet.
Thus, I was quite happy to find, while browsing around the internet a few weeks ago, a much more suitable photo of Harmon as a Bruin. As it is a press photo, it required colorizing, but that isn't usually much of a challenge.
I think you'll agree that the new version of my Mark Harmon card is a significant upgrade from the original.
Posted by Bob Lemke at 7:06 PM