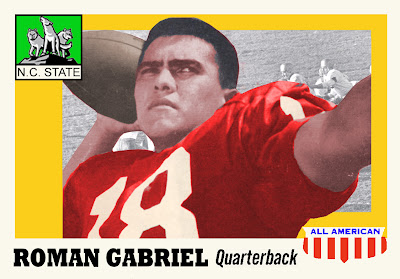 I've finally added a Roman Gabriel card to my checklist of 1955-style All-American football cards. But it wasn't easy.
I've always had Gabriel on my mental to-do list for the project, but had never run across a useable college photo. The Rams were always among my Top 5 favorite NFL teams in the 1950s and early 1960s, and when Gabriel finally got off the bench and became a starter, he became a player of more than moderate interest to me.
Maybe it was because he was the NFL's Joe Namath before there was a Joe Namath. He was literally tall, dark and handsome (he was once described as the "world's biggest Filipino) and his long hair made him stand out from the establishment quarterbacks like Johnny Unitas and Bart Starr, with their crewcuts. To a rebellious teen-ager (at least as rebellious as you could b

e in the mid-Sixties when you're white, middle class and living in a small Wisconsin city) who hadn't yet been brainwashed to hate pro football as a metaphor for The War, Gabriel was a player whose career I followed for a time.
I thought I'd struck paydirt in my card quest when I discovered Gabriel was included in the photo spread for Playboy's All-American team in the magazine's annual Pigskin Preview issue in 1961. I bought a copy on eBay for six or eight bucks, but when I got the magazine in hand, my hopes were dimmed considerably.

Creating a custom card from a magazine photo is always dicey. I knew from 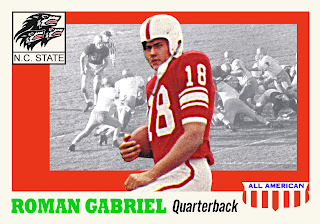 the preview I'd seen on line that Gabriel's image in the group photo was going to be small. It also turned out to be a bit fuzzy upon enlargement and the color printing was somewhat out of register. I diddled the image for a couple of hours last weekend, then plopped it onto the card's background. I didn't like the result (shown at left).
Another hour searching the internet for a suitable image didn't turn up anything useful; everything was either too small or too low-res. Fortunately, the search turned up an image of the cover of the 1961 NCAA record book, with an action pose of Gabriel.
An eBay browse offered my choice from among a handful of copies. Most were priced in the $15-25 range, which is more than I like to pay for the materials I use. I spotted a copy that had some items clipped from the interior pages and my low-ball offer was quickly accepted.
I was able to colorize the black-and-white cover photo and achieve an acceptable result, the image shown here at top. 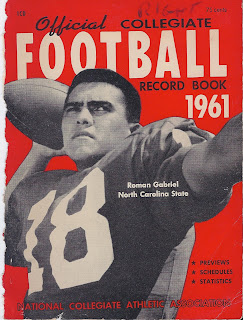 As is almost always the case, boiling down the copy for the back of the card to about 90 words was a challenge. Even though he never won an NCAA Championship or a Super Bowl, Gabriel had a great career and has led an exemplary life.
He was a three-sport star in high school and after sifting through college scholarship offers, elected to stay in his native state at North Carolina State. While he played freshman basketball and varsity baseball (a slugging first baseman, he once hit three home runs in a game), eventually he came to focus on football.

Even though the Wolfpack was mediocre during his three seasons as quarteback (11-18-1 from 1959-61), he caught the pro scouts' eye. He was both All-American and Atlantic Coast Conference Player of the Year in 1960 and 1961, and was academic All-American in 1960. He completed 285 of 506 passes in his collegiate career, for 2,951 yards. He threw for 20 touchdowns and ran for 15. During his days at N.C. State, his fans developed a new Wolfpack fight song, "Throw, Gabriel, Throw."

The Oakland Raiders made Gabriel the No. 1 overall pick in the 1962 AFL draft, while the L.A. Rams chose him with the No. 2 pick in the NFL draft. Back in those heady days of NFL vs. AFL bidding wars, Gabriel's football fortune was assured. He signed with the Rams, but later said that's because while he was being "baby sat" in a hotel room by the Rams' Elroy Hirsch, a phone call from the AFL with a $100,000 offer was intercepted by Hirsch, who being mistaken for Gabriel's agent, assured the upstart league that Gabriel was firm in his desire to play in the NFL.

Gabriel was among the firsy of the "big man" quarterbacks in the NFL, at 6'4" and 235 lbs. He had an incredibly powerful arm and took the Rams to two NFL Championship games. He was a four-time Pro Bowl selection and was league MVP in 1969. Plagued by knee and shoulder injuries, he went to the Philadelphia Eagles in 1973, when he was named Comeback Player of the Year, and retired after the 1977 season.

As a starting quarterback in Los Angeles, and given his physique and dark good looks, it was natural that Hollywood came calling. He played an unnamed prison guard in the 1968 LSD film trip Skidoo, and had his biggest role as John Wayne's adopted Indian son Blue Boy in the 1969 Western, The Undefeated, which also included in the cast teammate Merlin Olsen. He had a number of television appearances, including as a headhunter on Gilligan's Island, and also appeared in the Raymond Burr series Perry Mason and Ironsides.

Gabriel did some assistant coaching in the USFL with the Boston Breakers and Arizona Wranglers, and in the World League of American Football in 1991-92 was head coach of the 0-10 Raleigh-Durham Skyhawks.

Though slowed by a stroke in recent years, Gabriel has devoted enormous time and energy since his football days to raising money for charities in and around North Carolina. I'm glad I was finally able to add him to my checklist of '55-style college custom cards. 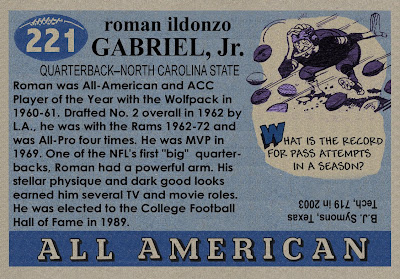