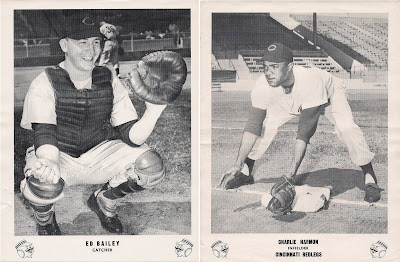 As promised last time, we're going to take a new look at the issue that has been listed in the Standard Catalog of Baseball Cards as 1955 Burger Beer Cincinatti Reds premium pictures.
The impetus for this is the recent receipt of scans that were previously lacking, and a near doubling of the checklist for this set.

In the course of my cataloging work over the years I have worked with several dedicated Reds' specialists on building and updating checklists for the Burger Beer premium pictures. Names that come to mind as especially helpful in that work are Len Samworth, Moe Ryan, Bob Montgomery and Mark Reed. The latter was instrumental in allowing us to finally picture and to greatly expand the checklist for 1955 Burger Beer premium pictures.
Burger Beer was one of the Reds' staunch sponsors and (presumably) stadium concessionaires in the 1950s and 1960s. In that period they produced several distinctive styles of Reds' player pictures, though the manner of distribution is unknown . . . at least to me. The pictures may have been given as point-of-purchase handouts, or possibly used to satisfy fan requests for a favorite player's picture.
The Burger Beer premiums are all similar in format. They vary a bit in size, but all have portraits or posed action black-and-white photos on front, surrounded by fairly wide white borders. In the bottom border are some combination of player name (sometimes first and last, sometimes only last name), position, team name and team logo. Backs are generally blank, except for a few issues that have a short advertising message at the bottom.
Dating of the Burger Beer pictures is problematic and in the SCBC, they have been assigned to their various "sets" rather arbitrarily, generally based on shared photo characteristics and the uniform worn by the player, even when the players depicted might not have been on the Reds' roster in a given year. To me, these anomalies suggest that more than one style of picture may have been produced in any given season. Some players, in fact, are shown in the same pictures in different years, sometimes with minor cropping variations.
The issue that we have cataloged as 1955 is one of those "Burger Beer" sets that may or may not actually have any connection to the brewery, since the pictures lack the ad message found on the issues of 1956-1957 and 1958-1959. Based on their similarlity of format to the known Burger Beer issues, however, collectors have accepted them as part of that family.
The 1955 premiums are the most visually appealing of the bunch. Besides large, sharp player action poses or portraits, the fronts feature the iconic Mr. Red anthropomorphized baseball logo in each corner of the wide bottom border. Centered on front at bottom, in either two or three lines of type, are the player name, position and, on most but not all pictures, team name.
It is possible this style of picture was begun in 1954 and continued into 1955, based on the fact that two of the known pictures in this format are of players who were traded away from Cincinnati in the 1954 postseason.
Previous editions of the catalog included no photo, and only 13 players on the checklist. We're happy to be able to greatly expand that checklist and to finally share with you images of this set.
(1) Bobby Adams
(2) Dr. Wayne Anderson (trainer)
(3) Fred Baczewski
(4) Ed Bailey
(5) Gus Bell
(6) Rocky Bridges
(7) Jackie Collum
(8) Art Fowler
(9) Jim Greengrass
(10) Charlie Harmon
(11) Ray Jablonski
(12) Johnny Klippstein
(13) Ted Kluszewski
(14) Roy McMillan
(15) Rudy Minarcin
(16) Joe Nuxhall
(17) Harry Perkowski (traded to Cubs, Oct. 1, 1954)
(18) Wally Post
(19) Frank Smith (traded to Cubs, Dec. 8, 1954)
(20) Gerry Staley
(21) Birdie Tebbetts
(22) Johnny Temple
As always, your reports of additions or corrections to this checklist are encouraged, if you can provide documentation in the form of a scan or photocopy.
Posted by Bob Lemke at 11:26 AM